By the Lake (U Jezera) peat bog

The peat bog “By the Lake” (U jezera) is located in the eastern part of the Ore Mountains, at 842 to 872 m above sea level. Merely two kilometers away from the municipality of Cínovec in the southwestern direction, this territory straddles two river basins – its eastern part lies in the catchment area of the 'Hraniční potok' (i.e., literally, the Border Brook), whereas the western part falls within the catchment area of the Bystřice river.

Crystalline seat rock with low to medium fissure permeability is typical for peat bogs; it can sometimes be permeable to great depths.

Hydrological research confirmed the diversity of the local geological subsoil. At peat bog “By the Lake”, altogether 66 drainage channels have been mapped, of which those that run along a pair of perpendicular forest tracks play a backbone role. It is from these that shorter channels branch off into the interior of the site, creating a densely ramified network. Their routes run in a general north-south to northeast-southwest direction. The eastern part of the site is seamed in the southwest by the Liščí potok, along with other border channels. Again, smaller channels crisscross the interior, as in the western part. In both parts of the site, the direction in which the groundwater flows largely matches the progression of the main channels to the points of drainage, i.e., the southwestern and southeastern corners of the site, respectively.

Geological probes confirmed peat bogs to be endemic across the entire territory of the peat bog “By the Lake”, but the experts concluded nonetheless, based on the progression of the channels, the character of the rocky environment, and the hydrogeological conditions, that not all parts of the site qualify as peat bogs in the true sense of the word (in particular, the northern tip and the eastern stretch of the western part of the site are covered with mature forest, the peat strata that have developed here are not as thick, and the ground is relatively arid. On the other hand, the eastern part is influenced by the trenched section of the road which acts as a drain, at least for the immediate surroundings).

Based upon the above findings, hydrogeologists, botanists, and zoologists identified those areas that would benefit the most from ecological restoration measures.

The land rehabilitation efforts took place in the fall of 2012, in that part which was included in the newly declared natural reserve "Rašeliniště U Jezera" (By the Lake, or Cínovec, Peat Bog). The restoration was implemented in accordance with the stewardship concept for this protected area. 61 small dams were installed in line with the project plans, which will eventually turn the greater vicinity of the rehabilitated land into waterlogged fields, thus facilitating the return of the original ecosystems to the area. 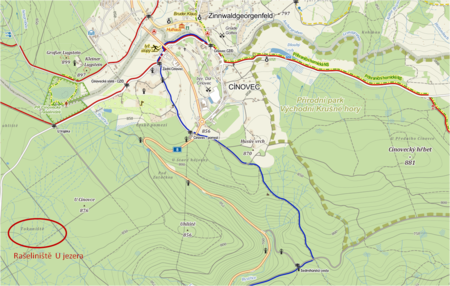 The By the Lake Peat Bog in the section Trip Tips