Trip of the month

Thanks to the Armillaria chapter of the ČSOP and the NET4GAS Closer to Nature programme, the ecologically very valuable region between Jablonec nad Nisou and Liberec has as of 2010 its own educational trail, on which hikers learn interesting facts about nature, wildlife, the importance of forest land, and its inhabitants. Visitors may also put their insights and knowledge about nature to the test by answering a number of quiz questions.
More >

Liberec's Opičák Forest Has a Restored Observatory and Visitor Elements

16.05.2022 Toward the end of April, the public was presented with newly refurbished visitors’ infrastructure in a forest known as Opičák, or Monkey, on the north-western outskirts of the city of Liberec. In 2006, this stretch of nature, highly prized by the locals, was bought up and transferred into the ownership of the Czech Union for Nature Conservation (ČSOP) as part of the A Place For Nature campaign. Within NET4GAS’s Closer to Nature campaign, it was subsequently furnished with a lookout point and other forest furnishings.

25.11.2021 Two new sites supported by the Closer to Nature programme, a collaboration of the Czech Union for Nature Conservation and its general partner NET4GAS, were opened to the public in mid-November: The new Pod Dubinami orchard near Říčany, and a new educational trail named after the Bělina Valley (Bělinské údolí) in the Třebíč area.

NET4GAS pursues a responsible policy aimed at protecting nature and the environment with respect to current and future generations. This principle not only underlies the company’s responsible entrepreneurship in gas transmission but is also the basis for its long-term strategy of corporate philanthropy and sponsorship, which has been implemented under the programme NET4GAS Closer to Nature since 2007. NET4GAS has been systematically providing long-term support to projects where a major aspect of sustainable development is expressed by precisely that motto – “Closer to Nature” – and is one of the largest corporate donors in the field of nature conservation in the Czech Republic.

Select from the encyclopedia 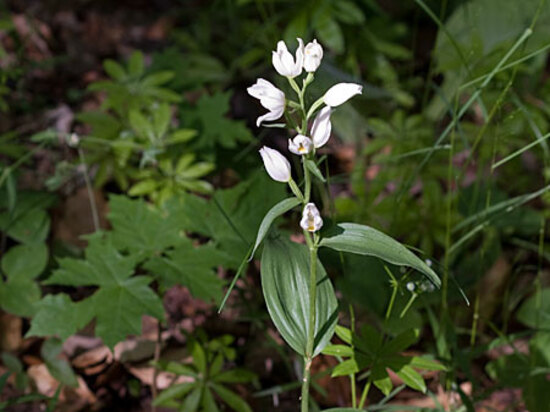 A perennial with erect stem, its flowers are a creamy white. It flowers from May to July. The flowers open rarely, as the plant usually self-pollinates inside the flower. It grows primarily in deciduous forests and on forest edges, but can occasionally also be found on non-shaded sites, usually in alkaline soils.

Go to the encyclopedia>