13.10.2015
On behalf of NET4GAS, COO Radek Benčík took over the VIA BONA Award for a Large Company, which the company received for its programme NET4GAS Closer to Nature, on occasion of a festive ceremony that took place on October 6, 2015. The company was nominated for the award by the Czech Union for Nature Conservation, for whom NET4GAS has been a reliable general partner since 2007.

VIA BONA is a prestigious public award bestowed upon individuals and companies in recognition of their charitable efforts in the Czech Republic. Each year, it highlights examples of sponsorship and philanthropy that are worthy of emulation, whereas 2015 already marks the eighteenth instalment of this award.

Thanks to the Closer to Nature programme, more than 70 natural sites in the long-term care of conservationists have been made accessible to the public since 2007. The programme seeks to motivate the general public to go and see interesting spots of nature, but also to elicit in people an interest in protecting nature and a sense of reverence towards it. NET4GAS sponsors the installation of educational trails, wildlife observation decks, lookout towers and platforms, corduroy paths, interactive elements, place markers for heritage trees and other valuable spots of nature, the publication of flyers and leaflets, etc. Often, the locations in question are home to rare or endangered plant and animal species. Lastly, the programme also promotes the environmental education of children and youths, and supports shelters for injured wild animals.

"People often take nature for granted, but they don't realize that over the past sixty years, we've lost 4,000 square kilometres of unspoiled countryside in the Czech Republic – which is an area six times as large as the Bohemian Forest National Park. Volunteer nature protection is still an underreported topic, even though around 7,500 volunteers have been exercising stewardship over 3,000 hectares of nature for more than 35 years, taking care to preserve animal and plant diversity in the Czech Republic. Were it not for the financial support of NET4GAS, volunteer work on this scale would simply be impossible," says Lucie Matulová, ČSOP's Project Manager in charge of Closer to Nature, adding: "The best way to protect precious spots of nature isn't to fence them off and put up Keep Out signs, but to make them our own and accept them as something of which we can be proud." You can find out more about NET4GAS Closer to Nature at www.blizprirode.cz.

This year, the VIA Foundation has bestowed the VIA BONA Award for philanthropy in eight categories, under the patronage of the U.S. Embassy. Visit www.cenaviabona.cz for more information. 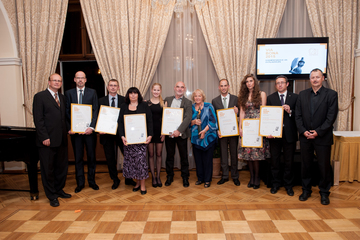