Cinovec Ridge location comprises of two separate locations (named Cinovec Ridge west and Cinovec Ridge east). The western location is situated to the south of Cinovec - Fojtovice road, approx. 0.5-1 km to the east of Cinovec municipality, its area covering 22.38 ha. The eastern location is situated approx. 1km to the east, north and south from the above mentioned road (which divides it into two parts of approximately the same size). The northern edge of the eastern location follows the state border with Germany, the area of eastern part covering 24.86 ha. Cinovec Ridge location is situated on the elevation of approx. 785 to 853 m.a.s.l., it generally slopes to the NNW and NNE. The location belongs to the basin of Roteswasser watercourse and is drained with several small watercourses to the N, in the area of Germany. The watercourses from the partial location of Cinovec Ridge - west are first taken through these small watercourses to the so called Dlouhy rybnik (Long Pond), from here further to the N. The whole location area is situated in the Protected Area of Natural Water Accumulation (PANWA) and in the protective zone of natural medicinal resources in Teplice. The southern area of both partial areas is interspersed with a network of draining channels. The general direction of the main channels in predominantly S-N, the shorter side channels empty into these main channels.

Altogether, 28 drainage channels have been mapped in the area of Cinovec Ridge - west. The drainage network is thicker in the western part of the location, where the main channels and their branches intersect regularly almost the whole area and are longer in general, while the channels in the eastern part appear only by the northern and along the eastern border of the area. The south-eastern part of location is without channels. The route of channels does not end at the border of the delimited interest location, but primarily continues further to the N. Altogether, 11 drainage channels have been mapped in the area of the Cinovec Ridge - east. The network of channels in the southern part of location (over the road) comprises of only two main long channels that cross the location in a general S-N direction, conformally with the direction of terrain inclination. Short parts of both channel beds are reinforced with flat stones in the southern section. Water flows into the northern part of the location (area under the road) from a culvert and its abundant flow continues further through the channel that disappears in an inundated area by the northern edge of the location. Similarly waterlogged areas, where the bed of the main channel occasionally cannot be traced, similarly concentrate along other channels in the northern part of the location. Water flows through some of these areas in a stretch of parallel small streams almost on top of the terrain. So called border ditch runs across the whole northern part of location. This is a discontinuously inundated depression, leading along an elevated terrain ridge with predominantly stagnant water.

Valuable areas, whose revitalisation appears as a priority, have been picked in the location after consultation with hydrogeologists, botanists and zoologists. In the area of Cinovec Ridge - west, this involves the south-western part of the area with valuable and not completely drained areas among channels. In the area of the Cinovec Ridge - east this involves the northern part of the area, where the peat bog has not been destroyed completely, either. The location of priority revitalisation areas is shown in the map. The revitalization itself was carried out in the years 2010 / 2011. 150 damns were installed according to the project documentation, retaining water in the area, which will result in the return of original ecosystems. 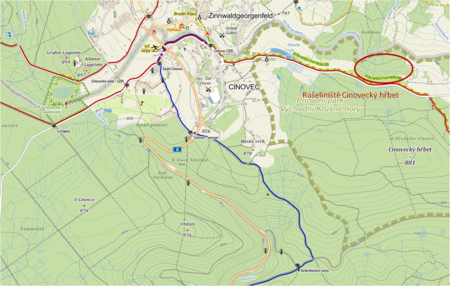 The Cinovec Ridge in the section Trip Tips