The hillsides of Velká Homolka (The 'Big Knoll'), an entomological treasure trove, are found on the eastern outskirts of Vimperk. Around 180 plant species and several dozen protected animal species can be found here, of which the insect life is the most interesting.

A part of the land at this site was bought up using money generated in the ČSOP (Czech Union for Nature Conservation) fundraiser 'A Place For Nature', and another part has been rented under long-term land lease agreements.  The local Šumava / Bohemian Forest chapter of the ČSOP exercises its stewardship of the land by carefully cultivating it through scything, keeping a local breed of sheep on the pastures, and reducing the amount of shrubs and trees that spring up from windborne seeds.

Within the context of the NET4GAS Closer to Nature programme, three rest areas were built on site in 2015, fitted with info panels and with a wooden puzzle that familiarizes visitors in a playful way with local plant and animal life.  Scientific research has confirmed, among other things, the presence of eight invertebrate species from the Red List – such as the critically endangered baton blue butterfly.  Bumble bees and beetles (tiger beetles, bee beetles, and longhorn beetles) also live here, and, with a bit of luck, you may encounter colubrids, true adders, and slow worms.

Atop Velká Homolka (at 751 m above sea level), visitors may want to take a close look at the lovingly restored summit cross or, weather permitting, gaze as far as Boubín Mountain. 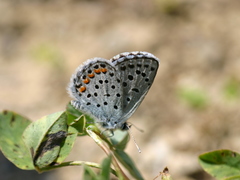 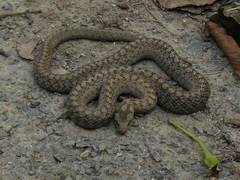