What's Hiding in the Reed? An Overgrown Path

17.10.2016
Thanks to the NET4GAS Closer to Nature programme, environmentalists have been able to build an interactive 'Path through the Reeds' at the "Růženin lom" (Rose's Quarry) near Brno.

For most inhabitants of Brno, "Růženin lom" (Rose's Quarry) is a household term. Hundreds of people flock to what is known as the "Pools" every summer in search of a place to cool off. This site has just become a bit more attractive, as the Czech Union for Nature Conservation has created an interesting new diversion for visitors: the Path through the Reeds – a walkway snaking its way through high stands of reeds above the water. However, the essence of the new attraction is not merely the walkway, but the opportunities that it offers in terms of watching the local wildlife, shy animals that hide behind the reedy curtains in numerous places. There is much to captivate your senses, but you should still watch your step, for a story has been burnt into the Path through the Reeds! The NET4GAS Closer to Nature programme thus proudly adds another site - the seventy-eighth across the Czech Republic.

For more than ten years, the Brno chapter of the Czech Union for Nature Conservation – the "Hády" land stewardship club – has been active in the Hády Quarries, which lie to the northeast of Brno, near Líšeň, taking care of valuable natural sites in their ownership or under long-term leases, but also raising public awareness. Two educational trails and the "Llama Centre", which offers environmental awareness courses for children, are newly joined by the Path through the Reeds, located in what was once known as Rose's Quarry. Thanks to a careful renaturation effort, which was built upon natural processes, today we find the denizens of wetlands, steppe and rocky slopes alike within the narrow confines of this modestly-sized limestone quarry. The bewildering diversity of habitats in a single spot of nature makes this place a paradise for many endangered species of plants and animals, such as the early marsh orchid, Daubenton's bat or the water rail, to name but a few, but also a feast for the eyes.

The reed stands in Rose's Quarry are one of only a few concentrated reed sites far and wide. They grow up to three meters in height, which makes the Path through the Reeds a truly mysterious experience. The Path is a one hundred and sixty-metre long journey along gravel trails and wooden planks. One of the junctions is actually a cul-de-sac, with a viewpoint at the end from where to observe what is going on and around the lake. An information panel has been installed here to tell visitors how well they fared along the way, trying to guess the animals that make occasional forays into the area and that came through here earlier, based upon animal tracks burnt into the plankway.

Zuzana Kučerová of NET4GAS had this to say: "It's not all about building extensive educational trails... Even small sites, such as the Path through the Reeds, have their magic, and their significance, which is something well worth showing to locals and visitors alike".

Path through the Reeds in the Trip tips section 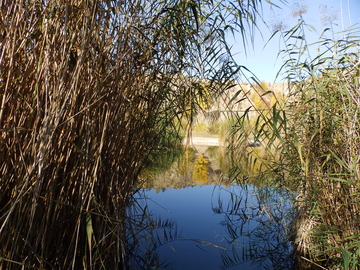