17.08.2013
Nature lovers and those with a penchant for abandoned places exuding a mysterious atmosphere may put a new item on their bucket list: a new, out-of-the-ordinary educational trail was opened to the public on August 17. Located in a “ghost town” on the border between the administrative regions of Pilsen and Karlovy Vary, it is supplemented by a bivouac shelter, which allows visitors to spend the night before resuming their hike the next day on the trail through the beautiful scenery of the Manětín Hills Nature Reserve.

Umíř is an abandoned settlement, spread across a plateau surrounded by extensive woodlands, not far from the castle ruins (and the identically named chateau) of Nečtiny. The history of this spot of solitude reaches back to the 17th century, when a total of eight homesteaders lived here. At the end of the 1930s, the area was directly affected by the dramatic events connected with building a line of defense against Germany, followed by the annexation of part of Czechoslovak territory. Very close to the village's former built-up area, one can still find the remains of the fortification line built in 1937. After 1945, the German inhabitants of Umíř were expelled; for a brief period the settlement then became part of the Dlouhá Louka military installation. Over time, the houses gradually succumbed to decrepitude. Only five wells belonging to various homesteads in the village, a chapel, and a few cellars remain to this day.

At this site, of particular interest to conservationists are the surviving meadows, which are the result of 500 years of human activity, and with the centennial orchard. To highlight the natural sights of particular interest, to keep alive the history of the place, to care for the old fruit trees, and to “resuscitate” this hidden gem - those were the goals of the Czech Union for Nature Conservation (ČSOP). In order to make the place safe for visitors, the wells were first covered, but a wooden windlass was installed across one of the wells, so that visitors may pull up their own supply of local water. A canopied sitting area was also built, which allows up to three people to bivouac overnight, and in the former village, six information signs have been erected, which supplement the existing panels with historical information.

The project came into being in cooperation with Lesy ČR and NET4GAS, the general partner of the ČSOP. “By way of the Closer to Nature program of NET4GAS, we have been seeking to get people to go outside and explore the beauty of nature in an entertaining, yet educational form since 2007. The protection of nature is an irreplaceable part of our CSR activities,” says Zuzana Kučerová, Promotion Specialist at NET4GAS. Jiří Šindelář from the Berkut Local Chapter of the ČSOP, who is in charge of the Umíř project, adds: “Thanks to the Closer to Nature program, we are able to introduce the general public to the beauty of the nature reserves under the patronage of our organization, and to continue our efforts to build bivouac shelters for visitors who are passing through. In the past few years, for instance, the program allowed us to build the “Katovna” (in an ancient place of execution) on Zlatý vrch in Bečov (Golden Hill), a log cabin at Nad řekou (Above the River), and a camping spot at the Saint Vitus Guild.” 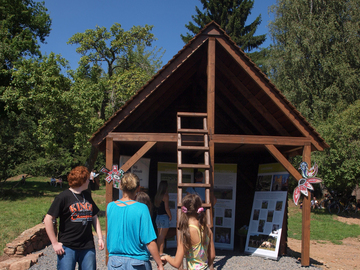