News
EN > News > Mysterious Fort or Where did Princess Libuše give her prophecy?

Mysterious Fort or Where did Princess Libuše give her prophecy?

23.05.2014
The Czech Union for Nature Conservation (CSOP) has come up with a fresh way of presenting people with a landscape as it takes on new life after having been mined for coal, and familiarizing them with its history as a major archeological site. A new educational trail built at Libušín near Kladno aims to show visitors that a 'fortified settlement' need not translate into a pile of rocks with boring labels that are only of interest to professional historians.

As of this weekend, locals and tourists can embark on a pleasant hike along a new one-kilometer circular that leads them to the fortified settlement of Libušín (hradiště, in Czech: an early middle-age precursor of the castle). Along the way, they will come across 11 new panels with information on the nature and history of the settlement, a safe footpath leading to the local water well, and seating for the foot-weary near the belfry of St. George, in the shade of the trees there. Building all this has been possible thanks to the NET4GAS Closer to Nature program.

The site is now quite the right place to go if one wants to gather an understanding of how the landscape can be transformed over millions of years - or over just the past twelve years:
The rocks beneath the feet of visitors as they make their way to the fortified settlement date from the Mesozoic era, when this area was submerged under the sea. Looking ahead, visitors can see Vinařice Hill at a distance of 5 km, which dates from the Tertiary period, when this area became very hot, and volcanic activity was common. And right along the trail, they witness a prime example of combined technological and natural landscape remediation after the Schoeller coal mine was decommissioned in 2002.

If we are to believe the chronicles of Cosmas, it was right here that Princess Libuše foretold of a city whose glory would touch the stars. Indeed, some archeological research suggests a permanent settlement after the 6th century, as well as the existence of a pagan temple, although there are also studies to the contrary. Everyone is invited to make up their own mind, aided by the wealth of information on the new educational panels installed along the trail.

The nature around the fortified settlement is very variegated. The types of natural environment one can find here range from sylvan terrain - such as mixed stands of hornbeam and oak, or scree forest - to coppice reclaiming former pastures, and to regularly cut meadows. More than 200 plant species grow here, providing shelter and food to untold numbers of animal species. Mighty, centennial stands of the Cornelian cherry dogwood are found on the fortification; the remnants of ancient orchards cling to the southern slope, and patient visitors may even chance upon the red-backed shrike or representatives of the genus Picus from the woodpecker family.

Aside from guided tours on the educational trail, the festive opening also included an accompanying program for children and adults, in the form of an entertaining contest. Upon being asked to give a candid account of the prep work devoted to the educational trail, Drahomíra Eiseltová, chairwoman of the local CSOP chapter for the Kladno area, had this to say: “We did some minor landscaping, built steps leading to the water well, erected rock pillars, cleared away the brushwood, and installed square stones and other decorative and structural elements. In the evenings, we worked on the content to be put on the info-panels. We literally had to arm ourselves with buckets of elbow grease. We are hopeful, though, that the effort was not in vain, but will bring this ancient fortification back to life.”

“We are happy that Closer To Nature made it possible to present this site, with its venerable history and noteworthy natural life, to the general public. As in the case of the other sixty sites that we've opened since 2007, let me wish the new site as many satisfied visitors as possible - and no vandals whatsoever,” said Zuzana Kučerová of NET4GAS, general partner of the CSOP.
The local chapter of the CSOP holds various public events at the fortified settlement of Libušín during the year, such as the Fort Days in spring and fall, or a nature exploration day, while they also participate in the Churches At Night program. Alternatively, you may want to make arrangements for your very own romantic tour of the newly reconstructed gothic belfry, which dates from the beginning of the 16th century. The Kladno chapter of the CSOP has also announced a public fundraiser for a new bell. Much to the chagrin of the local populace, the original bell cast in 1504 was stolen in 1996. 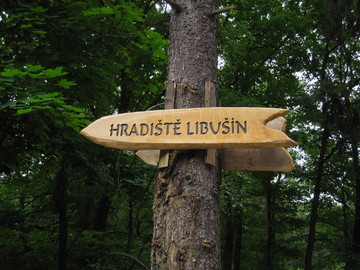