11.11.2020
The local chapter of the Czech Union for Nature Conservation (ČSOP) has built a new educational trail for visitors to the Bohemian Forest and its foothills and uplands. The trail is primarily dedicated to protecting the hazel grouse – thus its name, Bošík’s Hazel Grouse. Why “Bošík”? you may ask. The term of endearment references the fact that the trail lies on the outskirts of Bošice, a municipality in the foothills of the Bohemian Forest. This is the first trail dedicated to the hazel grouse in South Bohemia (indeed, probably in all of Bohemia).

Along its approx. 600 metres, the trail leads visitors into what is known as succession growth – a specific type of vegetation brought about naturally by airborne seeds of shrubs and woody plants. Such sites may look neglected at first glance, but they have their place in nature and often serve as a habitat for a variety of interesting plants and animals. Bošík is no exception. Aside from the eponymous hazel grouse, the local protected species of reptiles (grass snake, common European adder) and amphibians (common toad, true frogs) are particularly captivating. From the world of plants, we may mention the broad-leaved helleborine, a fascinating orchid.

At six waystations (one of them within a new gazebo), visitors discover all sorts of interesting facts about local birds and plants, the maintenance of meadows and pastures, the renaturation of the local landfill, and of course about the hazel grouse. This eponymous bird accompanies visitors along the entire trail. The trail was created with smaller children in mind: at each station, interactive play elements await them – Animal / Food / Habitat, Haptic Quiz, Explore a Dead Tree Trunk; Match the Pairs, and Insect Hotel.

Upon completion of the trail, wanderers may take a rest at the conveniently placed gazebo. For further enjoyment, free worksheets have been made available for children.

Let us invite you, then, to Bošice, the sixth site unlocked for the general public by the Bohemian Forest chapter of the ČSOP, with the kind support of the NET4GAS Closer to Nature programme. If you are hungry for more, check out the nearby Bohumilice Alley, the Sudslavice Circuit trail (which celebrates its 10-year anniversary since re-opening), Podlešák’s Elm in the hamlet of Boubská, the Velká Homolka (‘Big Knoll’) near Vimperk, or the Alpine Lookout beneath Bukovec.

This educational trail was built with the financial support of NET4GAS, acting as the general partner of the Czech Union for Nature Conservation. It represents the 103rd site created thanks to NET4GAS Closer to Nature, a programme through which NET4GAS has been supporting conservationist projects across the entire country for the past fourteen years. At press time, the ČSOP has unlocked no fewer than eight such sites in the region of South Bohemia. 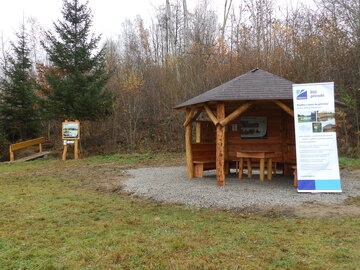