New fun trail for children and parents in Zásmuky near Kolín

25.06.2014
In the last week of school, the Czech Union for Nature Conservation (ČSOP) presented the general public with a new educational trail near Kolín, named "Zásmucká Bažantnice" (i.e. the Zásmuky Pheasantry). The two-kilometer circular track around the local game preserve offers five stations, a seating and resting area, and interactive features for children. The trail was created courtesy of the NET4GAS Closer To Nature program, with the support of the town of Zásmuky. "Šestka" (The Six), the Young Conservationists section within the ČSOP, contributed significantly to making the trail a reality.

The trail familiarizes locals and tourists alike with the history of this game preserve - in particular, the raising of a stock of white stags kept as hunting trophies, and the ancient Leopold oak. It also presents the animals and plants that keen observers can spot here. In spring, for instance, one finds lesser celandines, anemones, corydalis flowers, Stars-of-Bethlehem, and primroses. As for the animal world, the attentive nature-lover may notice the hermit beetle crawling up the bark of trees, and in the treetops of the old oaks, one can see bats, squirrels, and a number of cavity-nesting bird species.

"Preparatory work on this trail was done by the local ČSOP chapter, including the children from our group of Young Conservationists. They helped with the landscaping and with clearing the paths. I have a feeling that our bevy of kids will want to return here often and enthusiastically. Also, the place will surely be frequented by the local pre-school and elementary school," said Milan Petr of the Local Zásmuky Chapter of the ČSOP Zásmuky.
Small visitors, in particular, will enjoy the opportunity to measure the length of their jump against that of various animals in the newly-installed jumping pit, put their knowledge of birds to the test with rotating signs, grasp the concept of the natural food chain thanks to an ingeniously designed brain-teaser, or play with a beetle mockup. Together with their parents, they can peek into the Deer Tunnel, or climb the safe route above it to watch the brook as it runs through the gorge, or take a rest at the nearby seating area.
"It is not all that easy nowadays to motivate children to go outside and explore nature. This is why we make special efforts to make particular sites accessible and attractive to them, through means that are at once playful and didactic. Environmental education is one of the fundamental elements of the Closer To Nature program," says Zuzana Kučerová, senior promotion specialist at NET4GAS.

Five new info panels have been put up along the trail, as well as four interactive installations for children, seating, and steps leading up to the Deer Tunnel gorge. The railings above the tunnel have been repaired and secured, so that the trail is now also accessible to parents with strollers.
The festive opening of the trail took the form of a commented tour around the entire (well-signposted) two-kilometer footpath, attended by children from the local school, Zásmuky town hall representatives, and representatives of NET4GAS, the general partner of the Czech Union for Nature Conservation. 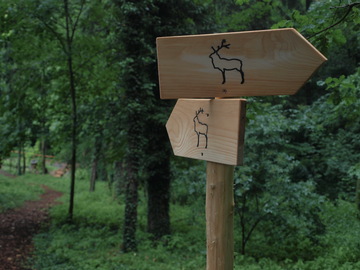