Let's wander through the Tišice landscape

04.12.2020
The educational trail “Wandering through the Tišice Landscape” has been newly opened near the village of Tišice, close to Neratovice. The restored trail takes visitors through various corners of the area, located on the banks of the Elbe River. The nearly 7-kilometre-long trail has been built by the local Koniklec chapter of the Czech Union for Nature Conservation (ČSOP) within the NET4GAS Closer to Nature programme. Pupils from the Tišice primary school also took part in the creation of this educational trail, and it could therefore be said that it is a gift from children to children.

The first nature trail in the area was created in 2017, when the pupils of the Tišice primary school produced 12 handwritten and hand-drawn boards, modest in size, on the occasion of Earth Day celebrations, and placed them on a circuit passing through the landscape in the immediate vicinity of the local Tišice part of Kozly. However, time and bad weather took their toll on these boards, and thus the existing small boards had to be replaced with new, larger and more durable ones after three years. This time, the pupils were joined in tackling the job by employees of the local Koniklec chapter of the ČSOP. Together they created a path that will be more attractive and durable than the original one.

The trail touches two specially protected areas: the natural monument of Jiřina, where the remains of the original alluvial forest are protected, and the natural monument of Polabí u Kostelce, with the preserved remains of cut-off meanders of the Elbe River. On eight stands, thirteen info panels adhere as closely as possible to the themes as proposed and elaborated by the children three years ago. In their new form, they merely enhance and supplement the original content. One extra panel was added to the original twelve, exploring the topic of the aquatic birds that can be spotted on the surface of the Elbe River.

All of the panels were created in close cooperation with current and former pupils of the school in Tišice, some of whom are also among the creators of the 2017 version. The children participated in creating today's info panels both as co-creators of the modified concept and as original authors of texts and pictures. Many of the organisms shown on these panels were observed by children in their research around their home.

Along almost seven kilometres, you are taken on a playful journey that teaches you about the fate of memorial trees, about the remarkable buildings in the area, about meanders and oxbow lakes, fowl endemic to the area, the phenomenon of alluvial forests, and about the wildlife found in a pond. At the end of the trail, you can test your memory with a quiz.

The first and last information panels are located in Kozly near the chapel (GPS: 50.2556233N, 14.5597622E). The route leads from Kozly along V Doubí Street to the Church of All Saints. From there it continues to the Elbe River, and then along the riverbank to the natural monument of Jiřina, before turning back in a northerly direction.

Financial support for the implementation of the educational trail was provided by NET4GAS, general partner of the Czech Union for Nature Conservation. This is the 104th site built thanks to the NET4GAS Closer to Nature programme. Through this programme, NET4GAS has been supporting projects in the field of nature conservation throughout the Czech Republic for the past fourteen years. Eighteen of these ČSOP sites have already been made accessible across the Central Bohemian Region.

Wandering through the Tišice Landscape in the Trip Tips section 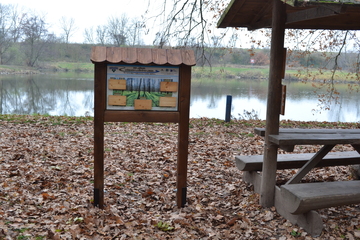