15.09.2020
The Borek Pools (Borecké tůně) educational wetlands – primarily made up of four small pools and one big pool, were created for amphibians and other species endemic to this biotope. We added a home for beetles and refuges for snakes and birds – additional measures for wildlife and for watching them in their natural habitat. And as a bonus, we threw in a one-of-a-kind information panel, a timber trackway that leads you straight across the surface of the water, interactive toys for children, a bench for taking a rest, and a place to listen to both frogsong and birdsong. The Bernartice chapter of the Czech Union for Nature Conservation has built all of this for nature lovers just outside the municipality of Borek (near Tachov) with the help of the NET4GAS Closer to Nature Programme.

The members of the Bernartice chapter of the Czech Union for Nature Conservation first put their spades to the uncultivated marshes between two larger bodies of water to dig a pool in 2019. Despite the dry summer that year, it took only a few days for water to fill the pool all on its own, following which frogs, dragonflies, and other living beings immediately took up residence. In 2020, the conservationists built one bigger pool, big enough to benefit aquatic birds that live on smaller bodies of water. Other attractions followed: A 17 m long timber trackway leads out to one of the smaller pools. On the edge of the meadow, you’ll find a bench on which to rest your weary feet, but also to listen to frogs and birds. A nursery for amphibians was built, with access to an underground hibernation burrow and to a nearby stone wall. Members from the order of beetles are not the only ones to profit from a beetle hotel, built of logs from a number of varieties of timber. Birds such as robins or wrens will be pleased to find a bower made of piles of branches and twigs and pieces of wood. Curious visitors will find that everything on display is explained on the information panels. Those with visual impairments can take a reading of the site by touching models of frog eggs, tadpoles, and frogs, supplemented by captions in Braille. An interactive toy in the form of a memory game starring our animals and birds awaits our younger visitors, who may also walk over to a neighbouring installation of wood beams to put together jigsaw images of frogs, newts, snakes, lizards, and dragonflies.

To find the Borek Pools educational site, follow the signpost and map near the main road (No. 195) between Stráž and Borek, and from there several additional markers. If you go by car, room has been made for a couple of cars on the edge of the forest, 800 m from the Borek Pools educational site (GPS: 49°38'35.232"N, 12°46'1.592"E). This is the 101st site built thanks to the NET4GAS Closer to Nature Programme, by way of which NET4GAS has been supporting conservationist projects across the Czech Republic for the past fourteen years. No fewer than ten such sites have been unlocked by the ČSOP in the Pilsen Region. 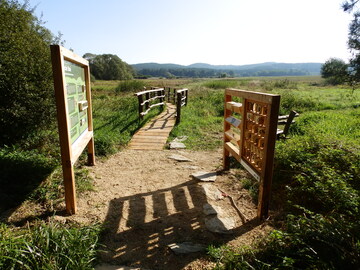