20.06.2016
In a festive ceremony, nature conservationists opened a previously neglected limestone quarry in the Jinošov Valley near Vlašim to the public, having created new pools for amphibians, as well as information panels and an observation deck facing the quarry for visitors. This is already the thirteenth site in the Central Bohemian Region that has been made accessible within the framework of the NET4GAS Closer to Nature programme, and the seventy-fifth site across the country.

About sixty years ago, the old Jinošov quarry still served as a source of calcite for the production of lime and the construction industry. When mining ceased, the quarry gradually disappeared under shrubs, saplings and other vegetation that supplanted numerous rare species of endemic plants and animals, especially amphibians. Thanks to the current project, the quarry has again become a natural home to amphibians, but also an interesting destination for day trips. The clean-up and renaturation work in the quarry and the installations for visitors were overseen by the Vlašim chapter of the Czech Union for Nature Conservation (ČSOP) within the framework of the countrywide NET4GAS Closer to Nature programme.

"The revitalization of the Jinošov quarry was preceded by two years of preparations. At the bottom of the quarry, we had to move the earth and remove copious amounts of trash. Only then could we proceed to excavate pools for amphibians. Finally, we fitted the quarry with an observation deck and info panels for visitors. We want people to know about the importance of such sites for nature, and we hope that spotting the occasional amphibian will add meaning and pleasure to their excursions into the Jinošov Valley," says Karel Kříž of ČSOP Vlašim.

What interesting sights can be seen in the quarry? Just around this time of the year, you'll be able to spot large numbers of tadpoles, which are clear proof of how happy the amphibians are about the newly-built ponds. This is the habitat of, e.g. the European fire-bellied toad, common and alpine newts, and several species of frog. The sunny slopes of the quarry walls are inhabited by sand lizards. Three info panels are devoted to the amphibians, but also to the plants, geology and history of the quarry. The colour and structure of the local grey limestone is best observed near a spot where conservationists have sanded down a part of the rock so that the rock face is laid bare, and installed an info panel. Speaking of which: younger visitors in particular will be delighted by Troll Jinoš, who shows up on each of the info panels.

"We have been ČSOP's general partner for no fewer than ten years already. As so many sites before, the site that was opened today under the auspices of our programme again introduces us to an amazing spot of nature that might otherwise have escaped the attention of many of us," adds Zuzana Kučerová of NET4GAS.

The site is found in the Jinošov Valley to the south of Vlašim. The nearby Road No. 125 runs from Vlašim to Louňovice pod Blaníkem. It can be reached by hiking visitors following the red hiking trail from Vlašim in the direction of the municipality of Kondrac, leaving the trail right after the junction in Jinošov and following the path around the fish ponds to the quarry. GPS: 49.6805108N, 14.9007869E. 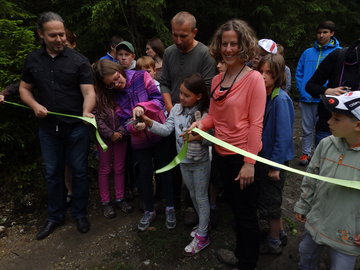