17.10.2019
Thanks to the kind support of the NET4GAS Closer to Nature programme, Spálené Poříčí, the local chapter of the Czech Union for Nature Conservation (ČSOP), was able to restore a wayside well known as "U cesty", which is found on an extremely popular hiking route to Radyně Castle near Pilsen. With this latest addition, the programme has so far helped restore ten wells across the Czech Republic, putting a protective canopy over them.

In recent decades, field and wayside wells, once a typical and generally beloved feature of the Czech landscape, have gone into precipitous decline. Some fell victim to landscape intervention, while others were lost or fell into disrepair for the simple reason that there was no one to look after them. However, there is renewed interest in them today. Not only are existing wells being restored, but in some places, new one are in fact being sunk. The primary motivation is to preserve the memory of the landscape, and in the case of newer ones, typically a desire to "beautify" the surroundings, while many hikers also welcome the opportunity to refresh themselves on their excursions into nature; all reason enough for the conservationists from Spálené Poříčí to spruce up one of these neglected wayside wells.

"We picked the 'U cesty' well for our rescue project because it was in truly desolate condition – all silted up and carrying preciously little water. The wooden roofing above the well was rotten through and falling apart. The people at Starý Plzenec town hall were very accommodating, and helped us secure the necessary permit to carry out the reconstruction," says Petr Jandík from ČSOP Spálené Poříčí.

The refurbishment entailed clearing the surrounding area, purging and deepening the wellspring itself, erecting a retaining wall, installing a canopy over the well, putting up an information panel, and installing benches for weary wanderers.

"It is not just the full-fledged educational trails around the natural treasures and hidden gems of our country that deserve our attention – tucked-away resting places and viewing spots are also important, which is why you will find them among the sites given support within the NET4GAS Closer to Nature programme. One of its main goals is to give access to invaluable sites of nature, not a few of which have dropped out of the sight of the public," commented Zuzana Kučerová, who is in charge of the programme at NET4GAS.

The hiking route that passes this well continues all the way to Radyně Castle. Perched atop the hill of the same name, this castle has come to symbolize the Pilsen Region, and is visited annually by hundreds of day-trippers from the nearby Western Bohemian metropolis of Pilsen (Plzeň). The wayside well should serve as a pleasant resting spot.

You will find this well by following the red trail markers from Šťáhlavy to Radyně Castle, approximately 200 metres below the junction where the red trail meets the educational trail "Staroplzenecká". GPS: 49°40'59.040"N, 13°28'20.160"E. This is the 97th site built thanks to the NET4GAS Closer to Nature programme. It is through this programme that the company NET4GAS has for the past thirteen years supported conservationist projects across the entire country. No fewer than nine such sites have been handed over to the public in the Pilsen Region.

"U cesty" wayside well in the Trip Tips section 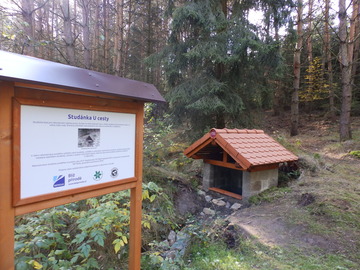