25.11.2021
Two new sites supported by the Closer to Nature programme, a collaboration of the Czech Union for Nature Conservation and its general partner NET4GAS, were opened to the public in mid-November: The new Pod Dubinami orchard near Říčany, and a new educational trail named after the Bělina Valley (Bělinské údolí) in the Třebíč area.

A total of 20 fruit trees were planted on Saturday, 13 November by the Czech Union for Nature Conservation (Velké Popovice chapter) near Dubiny, a settlement belonging to the municipality of Velké Popovice near Říčany, with the help of local volunteers. The trees that were planted are heirloom varieties of apple trees, which are resilient to harsh conditions and are well-suited to the local environment. Older fruit trees are for the most part disappearing from our countryside. They used to be an integral part of rural settlements, and in addition to providing a source of food, also played an ecological role, serving as a refuge for invertebrates and birds, providing shade, etc. The Velké Popovice chapter of the ČSOP is trying to stem the tide, and has been trying to establish new plantations in the Velké Popovice area for quite some time.

The Pod Dubinami orchard is located in the Velkopopovicko Nature Park south of the village of Dubiny (49.8878803N, 14.6555008E). In addition to the orchard itself, a relaxation area has been created in the form of a bench carved out of a cherry tree trunk and an information panel.

On Sunday, 14 November, a new educational trail was opened in the vicinity of the Bělinský brook near the municipality of Čikov in the Třebíč area. In the Bělinský valley, one finds a broad variety of natural habitats, from steppes to meadows, wetlands and forests. Meadow and steppe areas in particular, which in the past were maintained mainly by pasture and other activities of local farmers, have suffered from an overgrowth of weed trees in recent years, as traditional farming practices were abandoned. This changed in 2014, when the Náměstské rybníky chapter of the ČSOP began to take care of some of the land.

The newly built Bělinské údolí educational trail introduces the visitor to all this: To the variety of interesting species of plants and animals that can be found here, and to a variety of intriguing facts. The trail is made up of three parts – a shorter circuit (800 m), a medium circuit (1900 m) and a trail leading towards Čikovská Doubrava (5 km). 9 information panels have been placed along the trail, as well as a water-bird observation point, a viewing pier, and a resting place with benches. The introductory panel is located in the southern part of the village of Čikov near the local football field (49.2668864N, 16.1398225E).

The implementation of this educational trail and of the new orchard received financial support from NET4GAS, the general partner of the Czech Union for Nature Conservation. NET4GAS has been supporting nature conservation projects throughout the Czech Republic for fifteen years now. This is the third site opened under the Closer to Nature programme in the Vysočina Region, and the nineteenth site in the Central Bohemian Region. 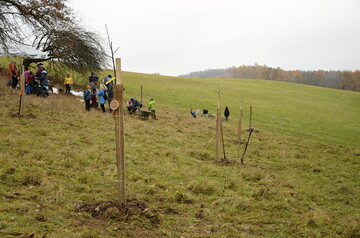