30.09.2016
In a festive ceremony, the Czech Union for Nature Conservation (ČSOP) today opened the restored Trip Around the World to the general public. This educational trail may be rather traditional in terms of its layout, but certainly not in terms of its concept. The total of 17 panels that you will encounter as you amble along the shores of the pond "Svět" (in English: “World”) near Třeboň are bound to captivate your attention, and even more so that of the children among the visitors.

Instead of dozens of lines of bone-dry text, complex drawings and strictly didactic photos, you will find witty, colourful and inspiring info panels that seek to entertain as much as they seek to educate. On your Trip Around the World, you may become inspired by numerous games, quizzes and suggestions for activities that one can try out right then and there. The world is ever changing, and with it our view of what an educational trail should be like! This particular trail is already the fifth site within the region of South Bohemia that has been made accessible to the general public under the auspices of the NET4GAS Closer to Nature programme, and the seventy-seventh nationwide.

The original educational trail "A Trip Around the World" was opened on 21 June 1985, and thus turned 31 this year. The last refurbishment took place in 1997, and since then the trail had been exposed to the ravages of time. The aging trail urgently needed repair – a challenge that called to action Václav Bartuška, chairman of the local ČSOP chapter in Třeboň. He made use of the opportunity to raise funds provided by the NET4GAS Closer to Nature programme, rolled up his sleeves, and set to work on the refurbishment. His experience with environmental awareness classes, and years of practice working with and teaching children in an outdoor setting, all contributed to the final appearance of the info panels. Who would have thought that the rhizome of cattail can be turned into a nutritious snack, or that blueberries can be used to paint a beautiful picture? That a blade of reed may serve well as a pen, and many of them together as roofing material? Do you like comics? If so, come and see for yourself that an educational trail is not merely a marked route for hiking, with some additional information slapped on, but that the trail can be a source of enjoyment and inspiration, as you open your mind and focus on your surroundings in the here and now.

"Seventy-seven sites of nature over the course of 10 years of collaborating with the ČSOP: these are the achievements of NET4GAS Closer to Nature, a programme aimed at motivating people to go outside and experience nature and wildlife. The authors of the new interactive trail around the Svět pond have certainly succeeded in achieving this worthy goal," said Radek Benčík, Managing Director and COO of NET4GAS.

The trail leads through scenery that is typical of the area around Třeboň, with fishponds, forests, fields and meadows, as well as authentic farmsteads. Along its 12-km length, there are countless opportunities to come across both common and protected plants and animals, such as the bog arum (calla) and the Eurasian otter. Given the many foreigners who visit Třeboň, all texts have been translated into English. The educational trail's starting point lies in the spa park near Hotel Svět (49.0012925 N, 14.7567339 E). 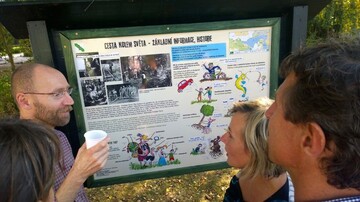