07.06.2019
The Cattle Trail is becoming a major thoroughfare: after last year's festive opening of the first waystation – Banner's Well – today marks the addition of another three: Sedlnice Snowdrops, Roveň Forest, and the Sad Tale of the Old Na Lapači Road. In this manner, the Czech Union for Nature Conservation (ČSOP), drawing upon the NET4GAS Closer to Nature programme, has launched a project that will keep it busy for several years, and that focuses on the restoration and unique interpretation of natural and cultural heritage within the corridor known as the Oxen Trail – an ancient pastoral route that centuries ago connected the Krakow area to Vienna.

As of today, the Cattle Trail has no fewer than 4 stations, all sharing a common theme in the form of an unconventional looking info panel, shaped like an ox and covered with information on both sides. The front is devoted to local points of interest, whereas the back is the same for all of the panels, providing information about the Oxen Trail as such. Embarking on the trail from the east, one first comes across an info panel entitled, "Sedlnice Snowdrops", not far from the village of the same name, which centres around the common snowdrop. Each spring, the surroundings of the village are swathed in a brilliant multitude of this flower. Further along the Oxen Trail, one then happens upon the municipality of Libhošť, whose info panel tells us more about the nearby Roveň Forest – one of precious few fragments left of what used to be the vast deep forest of Hranice. We also learn of the fact that the forest is currently exposed to a danger associated with the mega-project for a Danube-Oder-Elbe canal, which if implemented, would essentially mean the total destruction of this forest! Let's walk through the forest and explore the abandoned Zámeček settlement – a place with a twisted history. Since olden times, an inn stood here (whose ruins can to this day be found in the middle of the forest), which was frequented first by herdsmen, and later by day-trippers, before the entire site became a military installation in the more recent past. The final stop on our route, which was already opened last fall, is near Banner's Well – a travertine limestone spring surfacing on Hůrka Hill.

In the Oder Valley, the fragments of the Cattle Trail  – a historic "cattle highway" – are particular well-preserved, and in many places still form small havens of nature in the midst of an industrially farmed landscape. Unique ravines and parts of the pastoral forest are still discernible – in fact, we know where the watering troughs stood. The corridor through which the herds were driven is reasonably well-established roughly between Skotnice near Příbor and Bělotín near Hranice.

Restoration of the Cattle Trail  has been tackled by the local ČSOP chapter known as Studénka. "Segment by segment, we want to open the rest of the trail to visitors by foot, with tree lines of pear and plum trees, and all along the trail we want to revive characteristic sites of nature which used to be an integral part of it, such as field margins, farmer's orchards, wetlands, headwaters, springs, watering holes, and small architectural and technical monuments – that's our roadmap for what we want to build over the next few years," says Ivan Bartoš, spiritual father of the project and chairman of the local "Studénka" chapter of the ČSOP. In due time, the Oxen Trail will have a station in each of the nearby villages to help visitors make head or tail of the local natural and cultural heritage, enhanced with interactive elements.

The Cattle Trail has four stations for the time being: BANNEROVA STUDÁNKA (Banner's Well) is about 150 m from the bus stop Šenov u Nového Jičína, Salaš, at the fork of the road leading to the Salaš restaurant (GPS: 49.6178017N, 17.9741992E). The info panel SEDLNICKÉ SNĚŽENKY (Sedlnice Snowdrops) is approx. 1 km east of Sedlnice, on the edge of the Hranice forest near Joseph's Oak (49.6656717N, 18.1047875E). The station LES ROVEŇ (Roveň Forest) is found near the south-western border of the municipality of Libhošť (49.6209961N, 18.0642111E), and the station with the baroque name HISTORIE NEVESELÁ STARÉ CESTY NA LAPAČI (Sad Tale of the Old Na Lapači Road) lies near the Zámeček settlement, on the northern edge of Roveň Forest (49.6363097N, 18.0351358E). The Oxen Trail was opened to the public last year as the 92nd site within the Closer to Nature programme (whereas the tally now stands at 94). In the Moravian-Silesian region, the ČSOP has unlocked no fewer than 15 sites of nature within the context of the NET4GAS Closer to Nature programme, an initiative through which the company NET4GAS has been promoting nature conservation projects across the country for the past thirteen years. 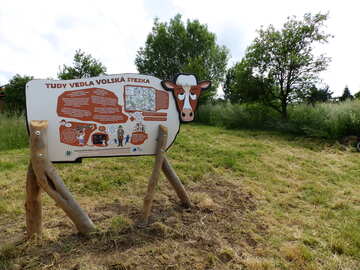