05.09.2019
Those who find themselves in Kynšperk nad Ohří cannot fail to notice, near the local train station, two large bodies of water known as the Liboc Wetlands (after the small village of the same name). These pools provide suitable living conditions for a wide range of aquatic animals and are an ideal nesting place for birds. With this in mind, members of the local Kynšperk chapter of the Czech Union for Nature Conservation, with the help of the NET4GAS Closer to Nature programme, have built a bird-watching platform, which makes it easier to follow the subtle wildlife dramas unfolding in this particular spot.

These pools near Liboc came into existence in 2012 without further human interference when the ground collapsed into waterlogged abandoned mines. The surface of the lakes gradually expanded, and today they are about three hectares in size. In 2017, the local Kynšperk chapter of the Czech Union for Nature Conservation (ČSOP) leased the site, which they have been monitoring ever since, in addition to exercising stewardship of the land and pursuing educational activities towards greater ecological awareness. Visitors to the site may be lucky to spot, e.g. the spotted darter (i.e. the dragonfly species – as opposed to the fish of the same common name) or the European tree frog, but the main draw is the abundance of interesting bird species. It was thus only natural for the conservationists to decide to make use of the possibilities offered by the NET4GAS Closer to Nature programme and build a bird-watching platform. “Thanks to this observation base, enthusiasts can discreetly watch spotted crakes, dunlins, little ringed plovers, or western marsh harriers, aside from many other bird species,” says Eva Řezníčková of the local Kynšperk chapter of the ČSOP. “For a better experience, we recommend that people carry binoculars. The identification of individual species is made easier by the info panel that we installed on site, which provides additional information about this habitat”.

You will find the bird-watching spot near the train station in Kynšperk nad Ohří. Starting at the station building, take the road along the rails in the direction of Liboc, and you'll spot the platform after about one hundred metres. GPS: 50°7'26.672"N, 12°31'7.372"E. This is already the 96th site built with the support of NET4GAS Closer to Nature, a programme through which NET4GAS has been supporting conservationist projects in all corners of the country for the past thirteen years. To date, no fewer than seven such sites have been created by the Czech Union for Nature Conservation in the Karlovy Vary region alone. Thirteen similar wildlife observation spots have been built across the entire Czech Republic by environmentalists. 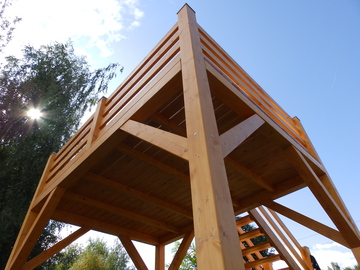