28.07.2021
The first site unlocked for visitors so far this year within the NET4GAS Closer to Nature programme lies within the Domažlice area, near a town called Pařezov. For a long time, the nearby hillock of the same name – Pařezovský kopec, or Pařezov Hill, a major landscape feature – has been looked after by the local Libosváry chapter of the Czech Union for Nature Conservation, as it provides a home for interesting plant and animal species.

The first site unlocked for visitors so far this year within the NET4GAS Closer to Nature programme lies within the Domažlice area, near a town called Pařezov.  For a long time, the nearby hillock of the same name – Pařezovský kopec, or Pařezov Hill, a major landscape feature – has been looked after by the local Libosváry chapter of the Czech Union for Nature Conservation, as it provides a home for interesting plant and animal species.  The conservationists have been pursuing pastoral farming on the site with grazing animals such as the yak, which is conductive to preserving the steppe character of this place.  However, as of today, any day-tripper who chooses to take the restored trail to the hilltop may help the local conservationists simply by scaling the hill by foot (as certain plant species prefer this way of keeping the competition at bay).

As a site of nature, Pařezov Hill is composed of dry heaths in which a number of protected plant species (green-winged orchid, lesser butterfly orchid, common restharrow, knotted clover) as well as insect species (scarce swallowtail, green tiger beetle, darkling beetle, solitary bees, pennisetia bohemica - a clearwing moth native to the Czech Republic - and bumblebees) have been observed.  As habitats, these types of forest-free sites are endangered in the Czech Republic, primarily due to the absence of long-term care.  The meadows on the slopes of Pařezov Hill haven’t been used for agriculture for decades, and as a consequence have become overgrown with windborne woody plants and tall grasses.  When the local Libosváry chapter of the Czech Union for Nature Conservation (ČSOP) assumed stewardship of the site, it cleared brush. Since 2004, it has brought goats, sheep, and yaks to pasture here.  It is these unevenly grazed expanses that offer the ideal conditions for rare species.  For instance, thanks to the work of the ČSOP, the incidence of the green-winged orchid has been slowly but steadily on the rise.

Even with all this loving care by grazing animals, woody plant species which propagate through windborne seeds keep cropping up on the site and need to be weeded out from time to time.  Consequently, members of the local ČSOP chapter engaged in a major brush-clearing initiative this year during which they removed coppice shoots. On this occasion, they also decided to restore the original trail to the hilltop, long since overgrown, along which plant species are found that cope well with being trodden upon by feet or hooves, such as perennial knawel, common bird's-foot trefoil, common milkwort, salad (or small) burnet, and many other, altogether less common species.  The rationale behind this step is the idea that the trail will attract many visitors going on a hike who will unwittingly keep the pathway free of unwanted vegetation and thus promote less competitive plant species.

Those who climb Pařezov Hill are rewarded with a gorgeous view of the Chod region, comprising the main ridge of the Upper Palatine Forest, the Hoher Bogen mountain ridge in Bavaria, the highest summits of the Bohemian Forest, and the Kunisch Mountains (or "Royal Forest") with the castle ruins Rýzmberk and Nový Herštýn.  The trail is approx. 850 m long and perfectly suited even for families with children or senior citizens.  At the beginning and the end of the trail, info panels provide visitors with a more detailed description of the site.  As a bonus, visitors may be lucky and encounter some of the yaks grazing along the trail.  The animals are strictly to be admired but must not be fed, as the info panel at the edge of the pasture explains.  The beginning of the trail is easily reached from the southernmost edge of the town of Pařezov (GPS: 49.4657022N, 12.8351581E).

This is the 105th site unlocked thanks to the NET4GAS Closer to Nature programme, through which NET4GAS has for the past fifteen years been supporting conservationist projects across the entire Czech Republic.  Today, no fewer than eleven sites in the Pilsen Region are being curated under the flag of Closer to Nature. 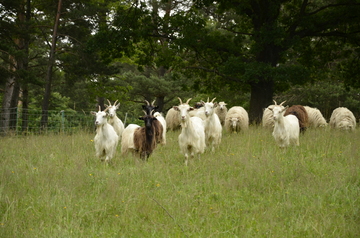