15.10.2013
The St. John’s Rapids educational trail, once a popular hike not far from Prague, has been resurrected after years of neglect. The completely restored trail was opened to the public on October 15.

The trail leads through the rock formations high above the Vltava (Moldau) River, places rich in history, and gorgeous nature. Once a whitewater canyon and the bane of raftsmen, the rapids have kept a lot of their charm to the present day, even after the Štěchovice Reservoir was built to tame them. Because of its unique atmosphere, the site became popular among weekend trippers as well as early “tramps” (a specific Czech breed of free-thinking hikers-and-campers) who established one of their first settlements here, the famous ‘Ztracenka’. The educational trail that had been built here many years ago was in an abysmal state, which is why the local chapter of the Czech Union for Nature Conservation (ČSOP) – the ‘Zvoneček’ – decided to sign up for the Closer to Nature program of NET4GAS. With the support of that program, and the support of the Central Bohemian Region, the ČSOP enthusiasts were able to completely overhaul the educational trail. Five months of arduous restoration work were crowned today by the festive opening ceremony.

The St. John’s Rapids trail is 8.5 km long and features 15 stations devoted to the surrounding nature; to the wildlife in the stream, on the rocks, and in the game park; to the history of the raftsmen and their trade and of the “tramp culture”; to the reservoirs forming the Vltava Cascade; and to the municipalities of Třebenice and Štěchovice. The information panels feature QR codes, allowing visitors to, for example, listen to campfire classics or to browse an extensive gallery of photographs on their smartphones. Children will enjoy four interactive elements that have been installed with them in mind - a riddle-board to recognize local birds, clever string connecting adults and larvae of insects, a rope climbing frame and a throwing-through wooden owl statue. The trail also boasts two new resting areas.

Work on the educational trail began with a fact-finding mission. Thanks to Blanka and Honza Reichardt, for instance, two hobbyist historians who are obsessed with local history, it was possible to collect an unbelievable number of historic photographs and vintage colorized picture postcards. Local ‘settlers’ contributed valuable additional information. One of the info panels is dedicated in quiet commemoration to a married couple, victims of the floods in the spring of 2013, who died here when flash floods carried off part of the escarpment on which they had built their hut. Their modest dwelling came down, along with its inhabitants. In this respect, we ought to issue a word of caution to all visitors: this educational trail is strictly for hiking! Cycling is strongly discouraged, as there have been a number of serious accidents in the vicinity in the past, in which cyclists were badly injured.

But how could the info panels be installed on terrain that is as inaccessible as the St. John’s Rapids canyon? The only means of transportation was by water. ”We stowed the panels aboard our ship near the bridge at Skochovice, and then went upstream towards the St. John’s Rapids. In and out we went, through the sluice chamber at Štěchovice, and within three hours we safely arrived at our destination, with none of the panels having gone overboard. There were some hairy moments, though; during one trip, the ship’s engine failed and we had to be towed off by another vessel. But all went well in the end – the info panels are safely in place, and satisfied visitors are the greatest reward for our efforts,” said Petr Janeček, Chairman of the Zvoneček Chapter of ČSOP.

“The St. John’s Rapids trail is already the third educational trail in the region that could be restored under the NET4GAS Closer to Nature program. The members of ČSOP Zvoneček deserve a big Thank You. I am convinced that visitors will enjoy this trail just as much as those at Medník and Zvolská Homole,” said Zuzana Kučerová of NET4GAS.

More information on the educational trail can be found on the website of ČSOP Zvoneček, www.cev-zvonecek.cz. 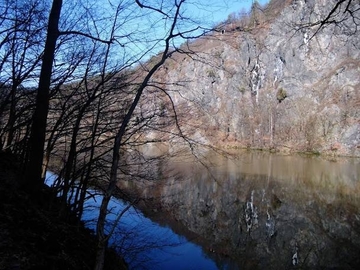