Solvay Quarry on Ještěd Ridge – Journey from Mining to Nature

15.06.2017
Inquisitive tourists and well-informed locals may already have noticed that a new signpost has recently sprung up above the Křižany train station, along the trail to St. Christopher's Chapel, to show the way to the Solvay Quarry – a limestone quarry that has long been forgotten by most. This has changed thanks to the loving care of the Czech Union for Nature Conservation and the considerable support from the NET4GAS Closer to Nature programme: the site is newly accessible to the general public.

If you decide to hit the trail, you will have the opportunity to discover the colourful history and the current natural and geological wealth of a truly magical place. Once you have scaled the hillside of the quarry, you will be rewarded with a beautiful view of the surrounding countryside.

The Solvay Quarry was still in operation into the 1920s, producing one of the raw materials for soda ash on three benches, from where the limestone was transported via ropeways to freight cars at the nearby train station. The quarry also unearthed a number of karst caves, among them the 'Robber's Lair'. Over the course of almost 100 years, nature recaptured the space of the quarry and gave rise to a valuable community of species. One of several local chapters of the Czech Union for Nature Conservation (ČSOP) in Liberec decided to draw attention to this intriguing site of nature. Under the auspices of the NET4GAS Closer to Nature programme, the conservationists created a new destination for hikers and day-trippers, with several info panels, a lookout point and a seating area. "The goal is to show visitors the enormous environmental value of this space, and to highlight how even a man-made industrial site such as an open-pit mine can over time add to, and enrich, the natural world," says Daniel Horáček of the ČSOP.

After taking in the gorgeous vistas of open land, which you can enjoy from a comfortable resting area, it pays to take a closer look at the rare plant life that can be found here. At press time, for instance, the orchid known as Dark-red Helleborine is blooming; in fall, the Fringe-flowered Gentian commands your attention. Come here in the evening and you might get lucky and have the opportunity to see bats as they emerge from their hiding places inside the caves. Ten different species of these flying insectivorous mammals have been recorded at this site.

How to get to the Solvay Quarry? There are several options, of which we'll present one: if you follow the green hiking trail from the Křižany train station in the direction of Kryštofovo Údolí, you will come upon a fork in the trail after about 1.2 km, where the yellow trail breaks away. From here, it is only a few dozen meters on the yellow trail until you arrive at your destination. 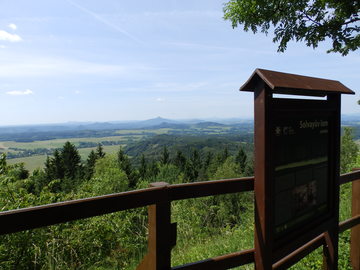