24.07.2020
18 stations with 3 panels along a 9-km route "Through the Bohemian Karst's Heart" – this is a new educational trail seeking to acquaint visitors with the natural treasures and history of the Karlštejn National Nature Reserve in the Beroun district. The trail also marks a centenary: 100 sites have now been completed within the Closer to Nature programme, a long-standing joint initiative of the Czech Union for Nature Conservation and NET4GAS.

It has been going from success to success for no fewer than 14 years. The development of these trails has also received significant support from the Ministry of the Environment, through its Landscape Conservation programme. The above-mentioned trail will be operated by the Nature and Landscape Protection Agency, whose staff has also materially contributed to the contents displayed on the information panels along the trail.

"The Karlštejn National Nature Reserve belongs to one of the most valuable landscapes in the entire country, where you may encounter hundreds of rare species of plants and animals. At the same time, this stretch of land has also been settled and used by humans for millennia. Paradoxically, it is also because of this human influence that the Bohemian Karst is as rich and interesting as we know it today," explained Richard Brabec, Minister of the Environment, who cut the ribbon in Srbsko today in a festive ceremony to open the new trail with 21 info panels, the implementation of which was supported by a ministerial grant program. Without pasture, there would be no meadows nor many of the unique rock steppes. Without the limestone quarries, we would know precious little about the astounding geological history forming this landscape... Because of this, the new educational trail not only points out numerous interesting facts about nature, but also gives room to the coexistence between humans and nature and references the deep history of this landscape. Even to this day, this area bears the marks of millennia of human activity, often going unnoticed by the casual observer, whether it be ancient sunken lanes and mines or the present-day appearance of forests.

Moreover, each of the 18 stations along the trail includes a suggestion, an idea, some food for thought for the budding observer of nature. How many plants might be growing on one square metre of soil? Which flowers are the most popular landing spots for butterflies? Might you be able to discover what animals live around here even if you cannot presently see them? How to transcribe birdsong? Can you navigate your surroundings with your senses other than sight? Can you measure the length of something without a ruler or measuring tape? These questions don't have a single correct answer. They seek to incite your curiosity, prodding you to become aware of minute details.

Some of the stations have been supplemented with interactive elements carved from wood - here's a maze and a magnifying glass, there are samples of different types of wood and different kinds of chalkstone. The trail also includes two resting benches from the workshop of artisan woodcarver Jan Viktora which have been designed in keeping with the overall theme, one of them presenting newts (once endemic to the Bubovice Valley but nowadays a rare sight in our more arid times), and the other trilobites, the best-known petrified fossils to be found in the Bohemian Karst.

Another interesting feature of this particular educational trail is that it preserves some of the old info panels which formed part of its predecessor, the extinct educational trail "Karlštejn National Nature Reserve" which came into existence as early as 1989 and whose route the new trail follows to some extent. The original info panels have been attached to the backside of the new ones, which gives visitors the unique opportunity to compare the principles which guided trailblazers thirty years ago to the present-day philosophy of educational trails.

"NET4GAS Closer to Nature has been an integral part of our corporate philanthropy since 2007. The goal of our collaboration with ČSOP is to present attractive and valuable sites of nature to the general public. We particularly emphasise the reasons why we should protect them, along with a balanced mix of educational and awareness-building aspects on the one hand and entertainment and adventure aspects on the other. One hundred unlocked sites across the country are a testimony to our efforts, and our way of saying thank you to ČSOP," said Radek Benčík, COO of NET4GAS.

"Our systematic collaboration with NET4GAS elevates Closer to Nature to the highest ranks of environmental education projects in the Czech Republic. I dare say that this cooperation between a commercial entity and a conservationist organization is peerless in our country. It allows us to guide everyday people, so that they may recognize and marvel at natural treasures. And this is the first step towards protecting nature in countless locations across the entire country," adds ČSOP Chairman Libor Ambrozek.

The educational trail "Through the Bohemian Karst's Heart" begins in the municipality of Srbsko near Beroun and ends at the confluence of the Kačák and Berounka rivers. An introductory info panel has been erected in the centre of Srbsko, at the eastern head of the bridge over the Berounka (GPS: 49°56'11.821"N, 14°8'0.632"E). Two additional "introductory" panels have been placed at the crossroads of the 'Sunken Waters' (Propadlé vody), where the trail meets another educational trail, "St. John's Circular Trail" (GPS: 49°57'59.418"N, 14°8'33.482"E), and at the very end of the route (GPS: 49°56'54.836"N, 14°7'39.949"E) for all those who might come from Beroun and would like to walk the trail in the opposite direction.

Within the context of the NET4GAS Closer to Nature programme, the ČSOP has been able to build 61 educational trails across the Czech Republic. Visitors may take a peek at the private life of birds, amphibians, dragonflies, and beavers from 13 observation platforms and 16 lookout points, or walk along 13 corduroy trackways across wetlands or learn interesting facts about nature, history, and geology from 579 info panels at various sites. A number of interactive elements have been built which will excite not only children and youth – containers filled with natural materials to explore one’s sense of touch, frottage (an arts & crafts activity similar to brass rubbing), a path through a reed maze with animal footprints to guide you, a watermill, diverse puzzles, wooden jigsaw games, instructive brainteasers, a Kneipp basin, a monument to extinct species, and a 'resuscitated' ancient well.

Through the Bohemian Karst's Heart  in the Trip Tips section 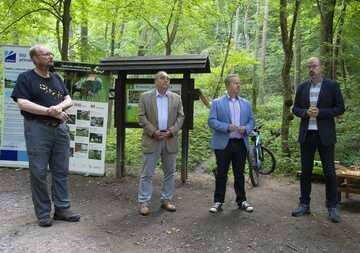