04.09.2014
NET4GAS has become the general partner of the national life-science contests Golden Leaf and Environmental Olympics for their upcoming 2014/2015 season.

NET4GAS has become the general partner of the national life-science contests Golden Leaf and Environmental Olympics for their upcoming 2014/2015 season. "Instilling a close relationship with nature in children and young people is becoming ever more difficult. For this reason, providing support to natural-science contests has become an integral part of our programme 'NET4GAS Closer to Nature', and for the new annual round that is about to start, we have decided to step up our game and embrace general partnership", says Zuzana Kučerová, who is in charge of the programme at NET4GAS. The contest is hosted by the Czech Union for Nature Conservation (ČSOP), and organized by the Young Environmentalists' Association, a youth interest group attached to the ČSOP.

There is no shortage of science contests for children and the youth, but for the most part, the way that they play out is "too academic": the participants meet in a closed room and spend their time by solving tasks or filling in tests. In the end, the results are announced on the same drab premises.

This is in contrast to the Czech Union for Nature Conversation's long-standing life-science contests Golden Leaf and Environmental Olympics. Their purpose is, quite to the contrary, to entice the young contestants to venture out into nature and to pursue various outdoor activities. The contest itself stresses the importance of the hands-on utilisation of knowledge and skills when it comes to resolving specific issues in the field, and of the development of teamwork. In the finals, the best teams meet once more out in nature with recognised environmental experts, solve puzzles, and try to best each other on the contest's designated nature trail.

"The ČSOP has a long-standing tradition of organizing contests for children and the youth. The Golden Leaf will be held for what is already the 43rd time since its inception, and the Environmental Olympics will celebrate their 20th anniversary this year. The contests are co-hosted by the Czech Ministry of Education, Youth and Sports. Hundreds of organizers and experts across the country are involved in the preparations and logistics", adds Jaroslav Síbrt, the coordinator in charge of both national contests of the ČSOP.

NET4GAS has been working on bringing people "closer to nature" for quite some time by supporting specific projects in the area of nature conservation and environmental protection. The name of the programme through which the firm is developing its corporate philanthropy strategy says it all: NET4GAS Closer to Nature. You can find out more by visiting www.blizprirode.cz.

More information on the contests can be found at www.zlatylist.cz and www.ekolympiada.cz. 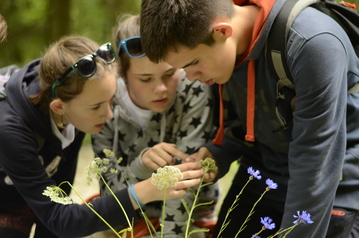