09.10.2014
The Czech Union for Nature Conservation (ČSOP) has opened a new educational trail to the general public - already the tenth of its kind in the Moravian-Silesian Region, thanks to the NET4GAS Closer to Nature programme. The trail is 4.5 km long and leads through the protected landscape area of (CHKO) Poodří / Oder Valley. It presents the floodplains of the Oder River, known for, among other things, their role in protecting the greater Ostrava area from floods. The interactive trail, fittingly named "Through landscape of floods", familiarises visitors with this issue and with other interesting facts at nine stations along the course of the Oder between Jeseník nad Odrou, Bernartice, and Suchdol. The opening ceremony was attended by the governor of the Moravian-Silesian Region, Miroslav Novák.

In an entertaining and playful way, the educational trail teaches curious hikers about the local nature, which several times each year completely submits to the rule of the element of water. Info panels tell the visitor about the past and present of the floodplains and their powerful mistress - the Oder River. The stations along the trail are devoted to the inhabitants of the floodplain and interesting aspects of their way of life.

"We are commemorating the 35th anniversary of the inception of the ČSOP this year, and, I am happy to report, we are also able to celebrate the 67th publicly accessible site of this kind, thanks to the growing awareness of nature conservation efforts, and thanks to the NET4GAS Closer to Nature programme", said ČSOP president Libor Ambrozek.
"The NET4GAS Closer to Nature programme and our collaboration with the ČSOP is an opportunity for us to get involved in environmental education, unlocking natural treasures to the general public, and promoting respect for valuable sites across the Czech Republic. We are committed to continuing our work on projects aimed at the protection of nature above and beyond the call of our statutory duties", added Radek Benčík, COO of NET4GAS.

The opening ceremony of the trail took the form of a commented walk, with contests for children and an informal discussion among those in attendance about how to best protect nature in practice. Kids had the opportunity to see with their own eyes the water-carrying capacity of a meandering riverbed compared to that of a watercourse that has been straightened. They found out the various sounds made by hard wood and soft wood, learned to recognize the call of the mysterious bird known as corn crake, touched a tree felled by a beaver, and participated in a stone skipping contest.

The educational trail has three starting points, and is easily reached by train. "Attentive visitors may spot, with a bit of luck, both stork species, the sea eagle, the common kingfisher, the goosander, and even the odd beaver, during a single visit - and if they embark on their trip in early spring, they'll moreover be welcomed by fields upon fields of wood garlic", said Ondřej Bartoš of the ČSOP's local Studénka chapter, which constructed the educational trail. The trail is primarily designed for family and school trips; if the weather is not too wet, it is navigable with an off-road baby stroller.

The educational trail "Through landscape of floods" is already the tenth nature site in the Moravian-Silesian Region to be made accessible to the general public in accordance with conservationist principles under the NET4GAS Closer to Nature programme: 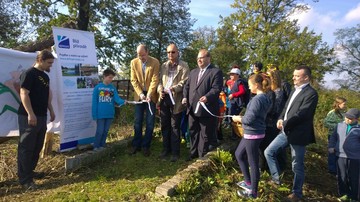