23.07.2016
In a festive ceremony, the Czech Union for Nature Conservation opened a new educational trail in the vicinity of Radnice in the district of Rokycany today, making the 1.5 km Olešná Brook valley more accessible, with 10 waystations that provide interesting local facts and figures. Visitors may try walking barefoot in the creek, rest on a nearby bench, or watch the birds residing in fifteen new nesting boxes. This is already the seventh site in the Pilsen (Plzeň) region that has been unlocked for the general public within the NET4GAS Closer to Nature programme, and the seventy-sixth site nationwide.

The Olešná Brook (in Czech: Olešenský potok) is an inconspicuous right-bank tributary of the Berounka River within the Horní Berounka nature park that is found almost 30 km to the northeast of Pilsen. Below the village of Olešná, it cuts into strata of black slate and creates a forest with ravines of up to 60 metres that is virtually impenetrable to forestry equipment. Thanks to this fact, the forest down the valley has long ago fallen out of silvicultural use, a consequence of which is the presence of dead wood. The fallen trunks, grown over with lichen, moss and fungi, provide shelter for animals and nutrients for the soil, impact the microclimate, and retain water. Locations with CWD, or 'coarse woody debris', to use the technical term, are a rarity today, and the organisms that depend on it are therefore threatened. Aside from the customary species, the local endemic wildlife includes the rare fire salamander, the yellow-bellied toad, the slow worm and the Eurasian eagle-owl.

The Olešná Brook begins right outside the village of Olešná and follows the course of the brook all the way to where it empties into the Berounka. The end of the trail near a cottage colony downstream of Olešná is connected to the red hiking trail between Chrást and Liblín. It provides visitors with insights about the valley, its nature, and its ties to the immediate vicinity. "Ten new information panels provide interesting facts about the way in which the sloping lands are farmed within the context of the torrential rains that have long been the bane of this community, about the local timber species, the coarse woody debris, the unwelcome black locust, the geology of the brook and its erosive power, and the local wildlife," outlines Karel Ferschmann from the Radnice Chapter of the Czech Union for Nature Conservation, which built the trail.

At the beginning and at the end of the trail, visitors can have rest in wooden gazebos with bike stands – the latter an indication that this trail is also navigable by bicycle. Along the way, why not engage in some bird-watching? Fifteen newly installed bird nesting boxes await their new tenants. Roughly along the mid-point of the trail, hikers come across a bench and steps leading into the water, and it is here that they may want to take off their shoes, wade into the brook, and have the unmediated, barefoot experience of a pristine riverbed, water and pebbles, or watch the nearby waterfall. A nice cache along the trail awaits geocaching fans.

"The new trail is yet another attraction enticing people to go outside and experience nature, which is the central mission of the NET4GAS Closer to Nature programme. It is within the context of this programme that we have already been supporting the Czech Union for Nature Conservation as its general partner for no fewer than ten years," adds Zuzana Kučerová of NET4GAS. 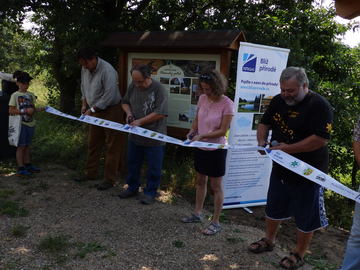