11.09.2014
With the support of the NET4GAS Closer to Nature programme, the members of the Czech Union for Nature Conservation (ČSOP) have breathed new life into the Avenue beneath the Hořínkova Cabin. Thanks to the dedicated efforts of local nature-lovers, this old road, lined with maple trees, could be saved, and visitors can learn more about it from a new information panel, or sit and relax in the comfortable new rest area along the trail to Buchlov Castle.

At the beginning of the 20th century, the lords and masters of Buchlov Castle at the time, who hailed from the house of Berchtold, laid the groundwork for the Avenue in question. As part of broader landscaping work in the general vicinity of the castle, this two-rowed maple avenue was planted and given the rather grand-sounding name "Knight's Road". The narrower path served those travelling on foot, while the broader path was paved with cobblestone and intended for horse and carriage. However, as the 20th century marched on, the avenue grew over with various types of underbrush, the seeds of which were carried here by the wind, and it generally became neglected. It fell to the local ČSOP chapter of Buchlovice (which also operates the local wildlife rescue centre) to drum up a couple of supporters and apply careful and considerate restorative care to hundreds of trees, as well as to plant nearly fifty new trees. The avenue in its present incarnation is 460 metres long.

The avenue is located along the yellow hiking trail that leads up to Buchlov Castle. As this is an extremely popular route among hikers, thousands of people pass through every year. "For this particular reason, we paved the footpath in this spot, so that visitors won't tread on exposed tree roots all the time", said Martin Tomešek of the local ČSOP chapter of Buchlovice, who also noted that his volunteer team installed an information panel and a seating area so that visitors can learn more about the history of avenues, and about the important role that they play in nature.

As a landscape feature, this avenue is an important habitat and a migratory path for fauna and flora alike. It is composed of two maple tree species: the sycamore and the Norway maple. In the hollowed-out trunks of the old trees nest numerous bird species, such as flycatchers, nuthatches, the dendrocopos genus within the woodpecker family, and others that seek their food here. Also, a bat colony uses the tree cavities as their wintering ground, and rare insects such as the Great Rose Chafer or the Stag Beetle rely on the weathered old wood for part of their life cycle. Thanks to the restoration and rejuvenation of the avenue, and the fresh supply of rays of sunlight, many plant species have also made a return. Among them, we may mention, e.g. primroses, buttercups (among them the Marsh Marigold), and the Greater Twayblade (an orchid).

"Whether you build a major educational trail or just a little rest area, such as the Avenue beneath the Hořínkova Cabin, this kind of conservation work makes sense, and this is why we support those who carry it out under the umbrella of the NET4GAS Closer to Nature programme. Learning more about interesting facts of nature and about the importance of the Avenue, and being able to take a break and have a seat, is surely much appreciated not just by the locals, but also by tourists who happen upon this remarkable site", said Zuzana Kučerová of NET4GAS, a company that acts as the exclusive gas transmission operator in the Czech Republic, and whose commitment to nature and its protection goes far beyond its statutory duties.

Autumn is a particularly beautiful time to visit, when the trees are ablaze with colour and the violet meadow saffron is in full bloom. 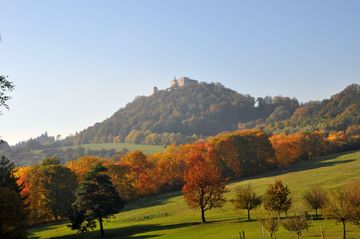