Liberec's Opičák Forest Has a Restored Observatory and Visitor Elements

16.05.2022
Toward the end of April, the public was presented with newly refurbished visitors’ infrastructure in a forest known as Opičák, or Monkey, on the north-western outskirts of the city of Liberec. In 2006, this stretch of nature, highly prized by the locals, was bought up and transferred into the ownership of the Czech Union for Nature Conservation (ČSOP) as part of the A Place For Nature campaign. Within NET4GAS’s Closer to Nature campaign, it was subsequently furnished with a lookout point and other forest furnishings.

The Opičák forest arose where a brickyard once stood, which ceased operations in the first half of the 20th century. As the industrial premises were given over to nature and disappeared under plant cover, the location was transformed into an unmanaged forest with numerous rainwater pools, and thus in due course became a refuge for many species deserving of attention. Given that the site is located near the Liberec airfield on one side and near the Liberec North commercial zone on the other, it was in danger in the past of succumbing to pressure by property developers. Through buy-outs of precious sites of this kind, the Czech Union for Nature Conservation seeks to preserve pieces of nature even in inhospitable surroundings such as these. The long-term stewardship of the Opičák site lies in the hands of the ČSOP’s local chapter, which goes by the name of Armillaria.

Inside the forest, visitors come across trees of various ages and a colourful range of shapes. Indeed, it may be because of the bizarre contortions of some of its 'monkeying' trees that the forest was given its name. Here one finds, e.g. aspen trees, oak trees, maple trees, birches, and poplars. Given the bog-like substrate, Opičák comes very close to an alluvial forest. It has ample use as shelter for birds, while locally nesting species include the greenfinch and the endangered golden oriole. Decomposing fallen timber is host to a range of species of fungi, noteworthy among them, e.g. the Dazzling Cup, Peck Seaver, Alder Webcap, Lentinellus flabelliformis, Velvet Shield, and Peziza succosa. The wet forest is also an excellent habitat for a dense cover of moss/lichen, and the forest pools are home to a variety of amphibian species. Last, but not least, two orchid species have been observed at Opičák – the Eggleaf Twayblade and the Broad-leaved Helleborine.

The main entrance gate to Opičák lies only 150 metres from the nearest bus stop, Ostašovská, which is part of the public transport network of Liberec. Visitors may explore the compact four-hectare forest by following well-trodden footpaths. Upon reaching the centre, they are greeted by a newly restored observation deck that is ideal for bird watching – or for quiet meditation. Right next to it is a refurbished bench, providing rest to the way-worn hiker. Two info panels provide interesting facts and titbits about the Opičák forest. Additional information can also be found on the website www.mistoproprirodu.cz under Saved Sites.

The elements of visitors’ infrastructure within the Opičák forest were built, and eventually renewed, with the kind financial support of NET4GAS, the general partner of the Czech Union for Nature Conservation, within the context of its Closer to Nature programme. 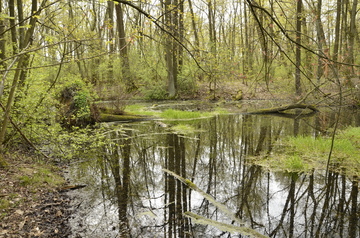