Křížov Quarry – Take a peek into the mountain’s interior

22.10.2019
The Czech Union for Nature Conservation (ČSOP) today unveiled yet another unique geological site to the general public – the Křížov Quarry, located in the foothills of Blaník Mountain. Making the quarry accessible to visitors was possible thanks to the NET4GAS Closer to Nature programme.

In the last century, quarry stone was mined for construction purposes in the Křížov Quarry in the Podblanicko region. After decommissioning, the quarry slowly, but steadily became overgrown. Today, it would be all but invisible under dense brushwood and trees, were it not for the loving care of the local chapter (named Vlašim) of the Czech Union for Nature Conservation. Thanks to its members, the quarry has a lot to show visitors – both from the realm of geology and from the realm of living nature. The ČSOP has decided to help visitors become acquainted with a great variety of interesting spots within the quarry and the treasures that they hold with the help of interpretative elements.

Not far from the mountain known as Velký Blaník, a quarry cuts through the elevation named Křížovská hůra. It was here that the Blaník orthogneiss was produced; the same type of rock of which the legendary Blaník itself is composed. After the end of mining operations in 1986, the quarry was left to its own devices. A precious community of plant and animal life came into existence on the bare rockface, composed of species that thrive at extreme sites such as this – of a kind that has become extremely rare in our latitudes. The sun-drenched rocky surfaces are home to rather rare insect species, such as the pearly heath (a butterfly). You may also encounter sand lizards enjoying the warmth. However, the most precious life form in the quarry turns out to be lichen – scientists have identified no fewer than 78 endemic species! For instance, one finds lecidea (disc lichen) on the rocks, cladonia (cup lichen) on the ground, and usnea, or beard lichen (among others) attached to trees. Sadly, the quarry gradually grew over and rare species began to disappear. Aware of the issue, the conservationists from the local ČSOP chapter took the quarry under their wings. With woodcutters and saws, they keep it groomed and preserve its original appearance. In addition, they’ve sunk a pond at the bottom of the quarry, fed purely by rainwater, which within a short time has attracted aquatic plants and become a sanctuary for amphibians.

"This year, we decided to make use of the possibilities offered by the NET4GAS Closer to Nature programme and to open the quarry to the public. It is important to show people how a variety of natural habitats, when well cared for, translates into greater biodiversity. While they’re here, visitors may also want to study in detail the interesting composition of the local rock formations, which can be found in the vicinity as part of many structures, both natural and man-made," says Karel Kříž of ČSOP Vlašim. As part of the project, six info panels were installed and a detailed slice of Blaník orthogneiss put up for budding geologists. There is also a fire pit, which should provide for a pleasant evening out in nature.

The Křížov quarry lies to the south of Vlašim, along the road that leads from Kondrac to Křížov, about 1.5 km to the north from the latter. GPS: 49°39'6.844"N, 14°53'16.149"E. This is the 98th site built with the help of NET4GAS Closer to Nature, the programme through which NET4GAS has for the past thirteen years been supporting conservationist projects across the entire country. At press time, fifteen such ČSOP sites have been made accessible to the public in the Central Bohemian region. 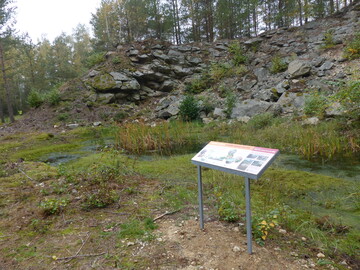