20.08.2015
The Czech Union for Nature Conservation (ČSOP) has presented to the public a new observation platform, which stands seven metres tall, within the unique landscape of the Kozmice Bird Meadows. This attractive hiking destination lies between Ostrava and Opava, and is already the eleventh site in Moravia-Silesia that has been unlocked for casual visitors thanks to the NET4GAS Closer to Nature programme.

"The Kozmice Bird Meadows are certainly remarkable. They are a textbook example of how it is possible, even today, to engage in farming and still to preserve important natural values. Creating awareness and explaining this issue is one of the fundamental goals of this project," says ČSOP president Libor Ambrozek, adding: "The newly built observation platform allows nature lovers to explore the world of birds and other animals from within touching distance."

Among the birds that will reveal themselves to the patient observer are protected species, such as the Great Egret, the Sea Eagle, the Black Stork, and the Eurasian Penduline Tit, but also a great variety of more common bird species. They, too, are presented to visitors, along with other facts of interest about this spot in nature, by seven new info panels, and of course by the bird-watching platform itself.
"Our support for nature conservation projects is a systematic, long-term affair. This place – which is already the seventy-first spot in nature that we have made accessible in collaboration with the ČSOP – perfectly matches the mission statement of our NET4GAS Closer to Nature programme: it opens the eyes of visitors to the natural treasure trove of our country through a mixture of education and entertainment," says Radek Benčík, Managing Director and COO of NET4GAS, the company that has since 2007 been the general partner of the ČSOP.

The Kozmice Bird Meadows represent a stretch of quite contiguous alluvial meadow in the Opava River basin. The past practice of 'amelioration' and straightening of watercourses, which involved the filling and systematic draining of wetlands (in the 1960s to 1980s), did not spare the Opava. The site's condition quickly began to deteriorate, as a large portion of the meadows was ploughed under to make room for maize fields, while stands of spruce and pine saplings were planted in other parts. This greatly decimated plant habitats, which in turn led to a decline in the local populations of rare butterflies and birds. In spite of all this adversity, the meadows did, at least in part, retain their great biological value. During the years 2013-2014, and with the support of the Operational Programme Environment, pools were being restored, and the wetlands underwent a general revitalization effort.

"Our club definitely isn't approaching this as a one-off activity. We intend to organize additional events for the general public that will take place in the Kozmice Meadows, such as guided walks for children and the youth, or – in collaboration with expert ornithologists – an event called Birdlife Days. We also want to engage the public by inviting them to publish their own bird-watching successes through a form on our website," adds Kamil Lisal, head of the local 'Ochránce' chapter of the ČSOP and local farmer.

The seven-metre tall bird-watching platform stands to the southwest of Kozmice; the road and the railway line between Ostrava and Opava run past it. Visitors may reach the site following the green hiking trail from the train station in Jilešovice, or Cycling Tracks Nos. 6096 and 6128. GPS: 49.9033222N, 18.1360383E. 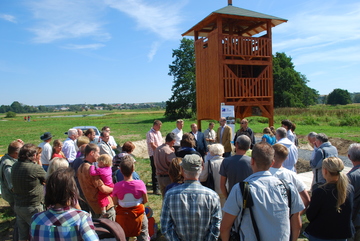