31.01.2019
ET4GAS Closer to Nature is a long-standing success story: The programme has been running for twelve years now, enabling the Czech Union for Nature Conservation (ČSOP) to acquaint the general public with 92 valuable sites of nature, for the most part through educational trails, observation decks, lookout points, and other forms of mediated natural treasures, seen through an educational lens, or retold from the perspective of leisure and entertainment. Many locals, day-trippers, and tourists have since discovered these sites and made them their own. Few would guess, however, that the programme known as NET4GAS Closer to Nature goes further than that: it also promotes what is known as management projects – that is to say, practical measures aimed at the restoration of habitats or the stewardship for specific species. In the course of the last year, four such projects were successfully completed that deserve a closer look.

The biggest of the four may be the first stage of restoration of the Hájek peat bog and the Poláček central woodlands in the Zbytka nature reserve near Náchod. Within the "A Place for Nature" campaign last year, the Czech Union for Nature Conservation was able to buy two hectares of land lying inside the reserve, primarily so as to improve the living conditions for extant endemic species (including the critically endangered Tall Violet, which is expected to make inroads from nearby stands), but also so as to create the necessary conditions for an attempt to resettle the (likewise critically endangered) Scarce Fritillary. This attempt forms part of the official national rescue programme for this species. With the support of NET4GAS Closer to Nature, the members of the local ČSOP chapter "Jaro Jaroměř" were able to tackle the pruning of the brushwood that has overgrown the former bogs and the gradual restoration of local oak stands, bringing light and air to the site and creating extremely desirable forest edges (that integrate existing, older oak trees).

The members of the ČSOP Šumava (Bohemian Forest) chapter meanwhile came to the rescue of lime trees forming the Bohumilice avenue in the district of Vimperk. Back in 2012, the NET4GAS Closer to Nature programme had already helped spark an intervention in Bohumilice, during which 28 small-leaved lime trees received an initial examination and treatment, and an information panel, resting place, and bench were installed. This year, an expert arborist looked after another 22 trees, overseeing the necessary cutback, which was undertaken for safety reasons, installing safety bracing on one specimen, and providing conservationist treatment to another. In addition, 12 small-leaved lime tree saplings were planted to fill in the gaps after dead specimens, and unwanted wind-borne vegetation (aspen, birch, willow) was removed: these woody plants would otherwise propagate into the crowns of heritage trees and provide no benefits in the long term.

Another interesting project was conceived and implemented by the members of the ČSOP chapter "Bílé Karpaty" (White Carpathians). In 2016, a plot of land belonging to the municipality of Louka (near Volavec in the district of Hodonín) was discovered to harbour the remnants of an original hay meadow habitat, with its typical thermophile vegetation, among them several protected plant species. Barely a year had passed before the conservationists arranged for the lease of the meadow from the municipality and reinstated regular scything. However, seeing as this priceless stretch of nature borders on a directly adjacent plot of farmland, it was necessary to create a protective buffer – namely, a 22 meter-wide belt of grassland, which the conservationists, thanks to the largesse of the leaseholders, could grass over with a regional mix of meadow seeds (patiently gathered from wild plants over the years by the local ČSOP chapter for precisely this kind of purpose). In this manner, the restored piece of wilderness not only received protection, but may actually expand further: target species from the original hay meadow will in future years spread out onto the newly-sodded land.

Within the municipal borders of Opatovice near Hranice (Moravia), one finds an old field lane lined with plum trees. A sandstone cross flanked by full-grown lime trees at the upper, eastern section of the lane forms a popular landmark for locals and visitors alike, who frequently go on walks in this direction. Judging from what is preserved in the historical record, this old road used to connect Opatovice to another municipality, Zimotín, which has since vanished. The plum avenue is estimated to have been planted in the mid-1950s, though the age distribution of the extant tree lines is diverse: some trees are close to the end of their lives, while others still bear fruit. Members of the local ČSOP chapter "Javorníček" were able to fill in the gaps on both sides of the road with a total of 48 domestic plum saplings within the context of their project: "Restoration of the Historical Plum Tree Avenue Leading to the Opatovice Roadside Cross". Given the sizable population of fallow deer in the surrounding forests, all newly-planted trees required extra protection in the form of two-metre-high sheaths that guard them against fraying and browsing. 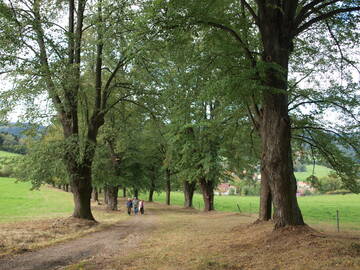