30.08.2019
About a kilometre east from Strakonice, within the intensively farmed alluvial plain of the Otava River, one finds the Hajská Pools nature reserve. Dozens of pools of water are scattered across a little less than seven hectares, and are inhabited by many rare plant and animal species. Onyx, the local chapter of the Czech Union for Nature Conservation, decided to highlight the biodiversity of the site, and in collaboration with the South Bohemian region and the city of Strakonice, and with funding from NET4GAS, created an educational trail into the heart of this green oasis.

Medieval gold panning and, in later times, the local production of fine gravel have given the site its highly rugged topography. The aforementioned activities created hollows, which later filled up to become dozens of pools of water. These precluded the use of the area for intensive farming, and ensured their survival to the present day. In addition, nature conservationists have also dug new, man-made pools over the past twenty years.

In terms of endemic species, the site is extremely rich and variegated. Particularly interesting is the aquatic vegetation, with frequent occurrences of two species of carnivorous bladderworts, the highly protected feathertail (or water violet), and the European frog-bit. Very occasionally, one may also find least bur-reed or tufted loosestrive on the shores of one pool or another. As to animals, the main attraction are ten different amphibian species, but one can also spot, e.g. the grass snake, easily identified by its yellow crescent collar patches. The birdlife is also quite interesting. "Spotting the river warbler, the Eurasian wryneck, the golden oriole, or the western marsh harrier, or hearing their calls, makes not only avid ornithologists' hearts beat faster," says Roman Barták, one of the creators of the trail and member of Onyx, the local chapter of the Czech Union for Nature Conservation.

The Hajská Pools educational trail is approx. half a kilometre long. Interesting local facts are summarized on five info panels. Visitors reach the site by following the blue hiking trail from Strakonice to Písek, and then turning left at the water treatment plant beyond the village of Hajská, where they enter the protected reserve and shortly thereafter happen upon the first info panel. This is the 95th site built with the help of NET4GAS Closer to Nature, a programme through which NET4GAS has been supporting conservationists' projects across the entire country for thirteen years and counting. To date, the ČSOP has unlocked no fewer than six such sites in the South Bohemian region. 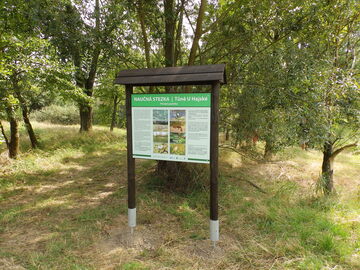