Efforts continue to save rare species at Načeratice Hill

19.05.2014
For three years now, the Beleco interest group has been working on the project “Nature In Green – Management of Sites of Community Importance Affected by Military Activities” on the territory of a one-time tank training area, Načeratický kopec (Načeratice Hill), not far from Znojmo.

This May ecologists started the next stage of site management, the basis of which is a sheep and goat pasture in parallel with the removal of self-seeding shrubs. Their activities are prompted by the fact that former military installations, which at first glance appear quite desolate, are in fact important sanctuaries for rare plant and animal species – and Načeratice Hill is no exception. This is also why it has been added to the list of Sites of Community Importance, which are a part of the Natura 2000 network of protected areas.

“To date, we have cleaned up more than five hectares of land, and we expect to be able to manage the same scope of remediation work this year”, commented Pavel Marhoul, zoologist and project manager of the registered interest group Beleco. He added: “The next step – a sheep and goat pasture – will improve the grassland composition in terms of the mix of species and thus promote the propagation of valuable flora and fauna. This is because the site is home to plants and animals that are on the red list of endangered species – for instance, rare beetles, such as jewel beetles, steppe leaf beetles, and weevils, as well as sand lizards, praying mantises, Green-underside Blue, and the Smooth Snake, and from among endangered plant life, the Greater Pasque Flower, the Illyrian Buttercup, and the Immortelle.”

“Preserving species in their uniqueness and diversity and raising awareness in the field of nature conservation are part of the mission of NET4GAS Closer To Nature, the program through which we have been supporting the Nature In Green project since 2012”, remarked Zuzana Kučerová of NET4GAS.

Military activities created a variegated mosaic of biotopes at the site, where denuded soil gives way to overgrown areas. In the 1990s, the army abandoned the tank training site, and Načeratice Hill began to be reclaimed by self-seeding shrubs, a phenomenon that puts rare species at risk.

Aside from Načeratice Hill, the Project “Nature In Green – Management of Sites of Community Importance Affected by Military Activities” is also being implemented at another pilot site, Blšanský chlum (Blšany Hillock), near Louny in the Ústí nad Labem Region. More detailed information can be found at the website: www.closertonature.cz. 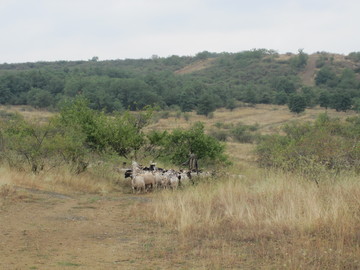