Discover an unknown hilltop in the Bohemian Central Uplands

09.05.2019
Among the countless hills of the Bohemian Central Uplands, one that goes by the name "Supí vrch" (Vulture Peak) rises above the hamlet of Lbín near Teplice. It is rather less well-known – in fact, on many maps, it is not even marked. According to local conservationists, though, the site is extremely valuable as a landscape feature and as an ecosystem, primarily thanks to the well-preserved rocky steppe habitat, which by recent accounts is home to twenty-two endangered vascular plant species. With this in mind, these local conservationists decided to make use of the possibilities offered by NET4GAS Closer to Nature and build an educational trail that would acquaint visitors with the attractions found on Vulture Peak.

The leafless iris, St. Bernard's lily, the small pasque flower, and many other rare plants can be found on one's way up Vulture Peak. The local plant communities are those of the rocky feather-grass steppe, a characteristic ecosystem on the southern slopes of volcanic rock elevations in the Bohemian Central Uplands. Up here, the spring months are a feast for the visitor's eyes.

The animal kingdom, too, is eager to show its best side. Vlastislav Vlačiha, creator of the educational trail and chairman of the local ČSOP chapter Launensia, describes one of his most recent visits to Vulture Peak as follows: "We were welcomed by the song of nightingales, and our path was first crossed by a blue ground beetle, beautiful in its metallic armour, followed by a slow worm. Closer to the top, the swallowtails were out in full glory. Flowers, too, stunned us with one surprise after another. The leafless irises were clearly impatient to herald spring and came out in full bloom, as did dense stands – carpets, really – of European feather grass, while fraxinella was preparing for its time to shine. It should be immediately obvious to everyone with eyes to see that this is a burgeoning treasure trove of nature."

Those who hike along the trail, which is roughly half a kilometre long, will come across four information panels: an introductory panel with general information on the site at the beginning, and two panels on the hilltop, which focus on the natural wealth harboured by Vulture Peak. The trail closes with a panoramic panel revealing to visitors what can be seen from atop Vulture Peak: a part of the Bohemian Central Uplands surrounding the highest elevation (Milešovka) and the Bílina River valley, from a somewhat unusual angle.

Visitors reach the "Supí vrch" educational trail from the bus stop Bžany, Lbín, where the first info panel is located. This is the 93rd site made accessible by the Czech Union for Nature Conservation (ČSOP) as part of the NET4GAS Closer to Nature programme. Through this programme, NET4GAS has for no fewer than thirteen years been supporting projects in the field of nature conservation across the entire Czech Republic. In the administrative region of Ústí specifically, ČSOP has been able to bring six interesting sites of nature closer to the public thanks to this programme. 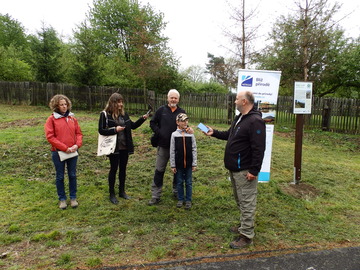