25.07.2015
The Czech Union for Nature Conservation (ČSOP) and its general partner NET4GAS have together made what is already the seventieth valuable natural site accessible to the general public within the framework of the Closer to Nature programme – a site known as "Choryně Sentinel" in the vicinity of Vsetín – by creating an educational trail and installing a bird-watching platform. This is already the tenth site within the programme in the Zlín Region.

The 8-hectare site known as "Choryňská stráž" (Choryně Sentinel) was declared a natural reserve in 1999. On the southern and south-eastern slope, with its extensive orchard (of mostly cherry trees), flowering meadows have been preserved, which, complemented by an oak grove and hornbeam stands, are home to numerous species of heat-loving plants and insects. Here, we find three orchid species, broomrape species, and various plants that are not actually that uncommon, but have been given rather exotic names: Saw-leaved Speedwell, Arum cylindraceum and Peucedanum cervaria (the latter known in Czech as smldník jelení, with a delightfully lilting series of five consecutive consonants). The old cherry orchard, in turn, has proven to be the ideal habitat for one of our most stunningly beautiful beetles - Anthaxia candens, or the Glowing Jewel Beetle.

The three-kilometre route leads visitors to the riverbanks of the Juhyně and Bečva, where they may, from the hiding spot of a new bird-watching platform, stealthily peek into the lives of birds and other animals, such as kingfishers, otters and beavers. Among the sights along the trail is also an outcropping of bedrock from the Mesozoic and Cenozoic eras, with precious paleontological and geological findings, which was exposed by the floods in 1997.

"Our concern for the natural environment extends beyond the letter of the law and represents a matter of our corporate social responsibility. This is the guiding principle both for our responsible way of doing business and for our long-term strategy of corporate philanthropy that we have been implementing since 2007 within the NET4GAS Closer to Nature programme. From the very beginning, the ČSOP has been our expert guarantor; the fact that together we have been able to make no fewer than seventy  natural sites accessible to the public, drawing tens of thousands of visitors every year, is no small source of pride and pleasure to us," says Zuzana Kučerová of NET4GAS.

"The NET4GAS Closer to Nature programme is an exemplary case of unique support that has allowed the ČSOP to engage in systematic and sustained work towards familiarizing the general public with the natural treasures of our country. Through a mixture of education and entertainment, visitors find out about aspects and parts of nature right here in their own backyard that are too interesting not to deserve our attention, our care, and our collective respect,” says Libor Ambrozek, ČSOP President. 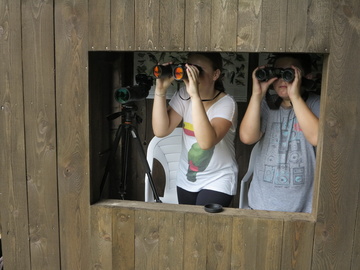