14.11.2022
At Slavkov, near the town of Uherský Brod, the local 'Pantoflíček' chapter of the Czech Union for Nature Conservation opened a new educational trail, named Kronika slavkovské krajiny (Slavkov – A Landscape’s Chronicle). The trail introduces visitors to the natural treasures of the area, but in no small way also presents the municipality’s partisan resistance towards the end of World War II, for which Slavkov is duly famous.

The educational trail Slavkov – A Landscape’s Chronicle leads visitors along a five-kilometre circuit out of Slavkov, along nearby fields and meadows, up to the Slavkov Grove (Slavkovský háj) – once the refuge of partisan fighters – and back to the village. Along the way, information panels, fingerposts, and a rest area with great views of the surrounding landscape have been installed. Using QR codes, these physical guiding elements are embedded in the trail’s online platform, where in-depth information on the various topics awaits the curious visitor. What topics? Well, the centrepiece is of course the local landscape, formed by human activities throughout the centuries. Were it not for indigenous cultivation and land management, the White Carpathian meadows would not be one of the most abundant ecosystems in the world today! Beyond that, though, the education trail devotes ample space to the history of the site, particularly the activities of partisan resistance fighters towards the end of the war, which put the area of Slavkov in the limelight:

"Following the Velvet Revolution, everything to do with the partisan movement began to fade from public awareness.  Having been abused by the previous regime for propaganda purposes, the topic lost its appeal for the public and the media.  And yet, the stories of those of our citizens who became directly or indirectly involved in the fight against the Nazis are testimony to their courage and ingenuity. This is part of what motivated us to go ahead and create this educational trail. After all, throughout the foothills of the White Carpathians, it was here, in and around Slavkov, that the largest number of partisans was active!", says Slavkov mayor Libor Švardala.

"With the educational trail Slavkov – A Landscape’s Chronicle, no fewer than twelve sites in the Zlín region have been unlocked for the general public within NET4GAS’s Closer to Nature programme. By way of this programme, our company has so far helped build educational trails, wildlife observation points, and rest areas for hikers at a total of 114 attractive sites of nature across the Czech Republic", says NET4GAS CEO Radek Benčík.

"The Czech Union for Nature Conservation, working through its network of local chapters, is keen to protect our natural heritage, which very often also means protecting cultural and historical values. The local ČSOP chapter in Slavkov, 'Pantoflíček', is one among more than 300. Their activities are of priceless importance for us all, whether they take practical care of orchid stands, plant trees, rejuvenate springs, remove illegal dumping sites as part of the Let’s Clean Up the World initiative, or engage in raising awareness or educating the general public, the youth and children in particular", says ČSOP executive vice-chairman Karel Kříž, who was among the attendees of the opening ceremony for the Slavkov – A Landscape’s Chronicle educational trail. 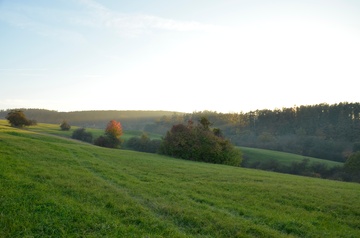