26.10.2022
This year saw the thinning and clean-up of the valuable natural site known as Mělnický lesík (Mělnice Grove) near Mělnice, a municipality in the Domažlice District. This rejuvenation drive was organized by the local Libosváry chapter of the Czech Union for Nature Conservation, with the kind financial support of NET4GAS.

Mělnice Grove is the name of a stand of trees surrounded by farmland, about half a kilometre to the southeast of Mělnice, on the northern slopes of Hřešín Hill (49.5902367N, 12.8187592E).

The oldest aerial pictures show pastures with scattered trees in the spot where the grove is found today. These land plots were found to be ill-suited for modern farmland management (because rocks and boulders prevented easy access with agricultural machinery) and thus escaped the fate of becoming part of large, consolidated arable fields. Thanks to this, remnants of steppe and dry grassland – biomes which have becoming exceedingly rare – have been preserved in a part of the site. Another part was eventually overgrown by trees. Together with the nearby Mělnice Fortification, the site today serves as a refuge for a broad variety of insects, vertebrates, and plants within a landscape that is under intensive cultivation. One may in fact encounter a number of rare species, such as the Eurasian hoopoe, the Eurasian wryneck, the common restharrow (a prostrate woody perennial), the knotted clover, or the lesser butterfly-orchid.

The Libosváry chapter of the ČSOP has had stewardship of the site since 2010, which was when the first conservationist interventions took place on the site, consisting of the removal of some expansive woody plants that propagate by wind dispersal. Since then, the land has been grazed extensively by goats and sheep, but also by yaks, which the ČSOP Libosváry chapter uses for its work. Pasture is immensely beneficial to the rare local species, and preserves the character of the site, best described as open (light) forest.

Thanks to the NET4GAS Closer to Nature programme, a rejuvenation drive could be undertaken at the Mělnice Grove this year, which included another clear-cutting of invasive and expansive woody plants; the removal of stands of blackthorn, blown apart under the weight of snow, and of dangerous tree torsos; and the thinning of birch saplings. In the south-eastern part of the grove, members of the ČSOP chapter cleaned up an illegal dump (of fertilizer bags, parts of agricultural machinery, tyres, aluminium cans, and bottles) so old that it had already partially disappeared under the vegetation.

At the entrance to the grove, a new info panel has been installed, which tells visitors about the history of the site and its natural wonders. Sadly, no official path has led from the village to the grove since a local farming business ploughed up an existing footpath in 2012. At least through part of the season, the little forest can nonetheless safely be reached. The ČSOP chapter is currently engaged in talks on the restoration of the original path. 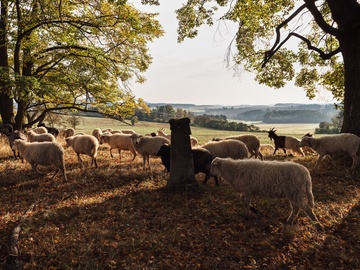