19.04.2013
On these days come and have a look at thousands of saffrons around the Wallachian village Lačnov and welcome the spring season.

In the context of Czech flora, saffron (crocus albiflorus) is an exotic plant whose journey to Czech Lands remains surrounded by mystery. We know that its origins are in Southern Europe, but a plausible explanation how the plant got as far as Wallachia is yet to be provided. Old legends suggest that saffron seeds fell from carriages carrying hay used by Napoleon's armies as fodder for horses. Be it as it may, the presence of saffron so far away from its original habitat is so unique that an area in Lačnov was declared a natural heritage site in the 1940s.

According to a count taken in the spring of 2012, as many as 35 thousand saffrons bloom on a meadow in Lačnov's center near the local elementary school every year 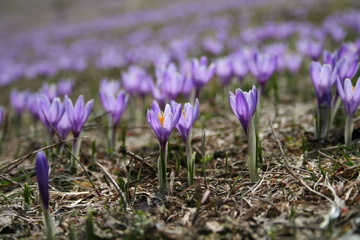