23.07.2013
The DAPHNE Czech Republic Association successfully completed the final phase of the project for the Revitalization of Peat Bogs in the Ore Mountains. As a result of the NET4GAS programme Closer to Nature, the Cínovec vicinity remains an area with the occurrence of a number of other rare species and habitats.

The civic association DAPHNE Czech Republic - Institute of Applied Ecology, with the support from the NET4GAS Closer to Nature programme, completed the recovery of the “U jezera” (Lakeside) peat bog near the village of Cínovec. The newly built system of wooden barriers in the drainage canals is already fully functional. In the same way as in the “Cínovecký hřbet” (Cínovec Ridge) locality, revitalized in the years 2010 - 2011, this helps to raise the water table, thereby restoring the original natural habitat - active raised bogs, peat bogs and acidified spruce. In both areas, more than 210 wooden barriers have been placed across an area of over 25 hectares.

Jan Dušek, the director of DAPHNE Czech Republic, explains the principle of the peat bog recovery: “The water around the barriers that have been built shows that the barriers work. The sphagnum moss is now beginning to edge out the unwanted plants, and a layer of peat layer is gradually building up. This effect can be observed in the previously revitalized peat bog Cínovecký hřbet, and after the winter, also in the “U jezera” (Lakeside) locality. The revitalization of both sites will contribute to the preservation of native plants and animals, such as the carnivorous sundew and the rare black grouse,” Dušek said.

“The preservation of the original character of the landscape is inherent to our social responsibility. Therefore, since 2007, within the framework of the NET4GAS Closer to Nature programme, we have been supporting projects that see the motto “Closer to Nature” as an important part of sustainable development,” said Radek Benčík, NET4GAS COO. 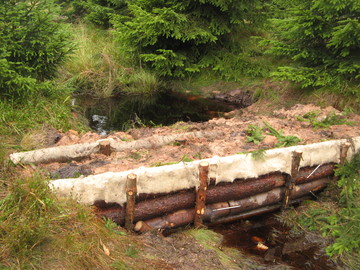