Boršov Meadows Near Kyjov Now Open to the Public

16.06.2022
The Boršov Meadows represent a well-preserved example of the type of biotope known as alluvial meadows, which span the floodplains of the Kyjovka River near Boršov, a part of the town of Kyjov. The local chapter of the Czech Union for Nature Conservation has been looking after the site for no fewer than nine years already. Aside from acting as great stewards giving care to the meadows, the conservationists have also been striving to make the site more accessible to the general public. This year, thanks to the NET4GAS Closer to Nature programme, they have been able to add visitor infrastructure.

The trail, which begins at the junction of the road from Čítkův mlýn (Čítek’s Mill) to Šluknov (50.9848008N, 14.4597667E), is divided into sections by a total of three stations. The first one is devoted to the legend of a Wild Man who supposedly inhabited the local groves and once haunted the people living in the greater vicinity. This station also draws attention to a small nearby monument commemorating the Schweidrichhäusel, a disappeared cottage that used to be the gathering place for a local gentlemen’s club.

The trail goes on until it reaches a former granite quarry, where the next station awaits with an info panel. The site is not only of mineralogical and geological interest, but also harbours attractive plant and animal species. On the lower storey of the quarry, one finds a population of the common spotted orchid (Dactylorhiza fuchsii). Higher up is a waterlogged section. Surveys have revealed the presence of amphibian life, represented, e.g. by the smooth newt, once a common sight everywhere in this country. The subterranean space of the quarry, and of the nearby Schweidrich mine, serve as wintering grounds for a number of bat species – the greater mouse-eared bat, Brandt’s bat, Natterer’s bat, the northern bat, the brown long-eared bat, and Daubenton’s bat.

In the forest, ahead of the first station, the educational trail forks, and those hikers who decide to follow the path away from the quarry will be taken all the way atop the Deer Rock (Jelení skála), to a place known as the Grohmann Rise. Given the current deforestation of the local spruce stands, visitors are afforded a one-of-a-kind view that takes in the surroundings of Šluknov, obstructed for the past 80 years. A wooden panoramic chart provides helpful guidance.

The entire route, there and back again, is about 4 km long. Parts of it are negotiable for strollers. Visitor parking is available next to Čítkův mlýn, or alternatively, a footpath leads here all the way from the municipality of Šluknov, which is at a distance of about two kilometres. Benches for the footsore are installed along the trail.

This educational trail came into existence thanks to the financial support of NET4GAS, the general partner of the Czech Union for Nature Conservation. It marks the seventh site opened within the Closer to Nature programme in the Ústí Region. Through this programme, NET4GAS has been promoting conservationist projects across the country for the past sixteen years. 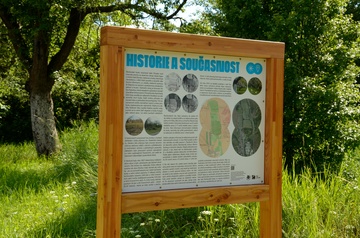