08.07.2013
Ecologists have completed the entomological monitoring of the “Blšanský chlum” (Blšany Hillock) nature reserve. The uniqueness of the former military training area will be preserved for both biologists and visitors through the project Natura in Green.

Last year, the results of the initial feasibility study gave the green light to environmentalists, who removed the natural seeding of bushes in the most valuable parts of the locality last autumn, and continued by introducing more than one hundred goats and sheep this year. “Grazing improves the species composition of grasslands, supporting the development of valuable fauna and flora,” explained Lenka Vokasová, the Project Manager of Natura in Green of DAPHNE Czech Republic. The herd will stay at Blšanský chlum until the end of June, and it will be reintroduced again in October, with a similar pattern repeated next year. “The Jersey Tiger (Euplagia quadripunctaria), which is the subject of protection in this area, is an example of a species tied to the unique local habitats,” Lenka Vokasová added.

Blšanský chlum is a former military area, mistakenly believed by the public to be devastated. However, just the opposite is true. It is a unique natural habitat, whose ten-hectare relief was created by the prolonged use of heavy machinery. Maintaining the desired condition of the area is now crucial for the survival of many plant and animal species that are tied to areas with disrupted surfaces.
The Natura in Green project was launched in 2012 in two pilot localities of European importance included in the Natura 2000 network; the same management as that for Blšanský chlum is also being implemented for “Načeratický kopec” (Načeratice Hill) in the district of Znojmo. 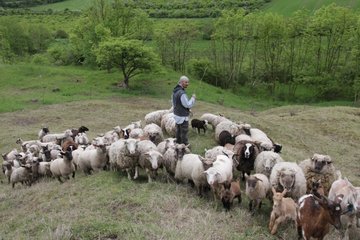